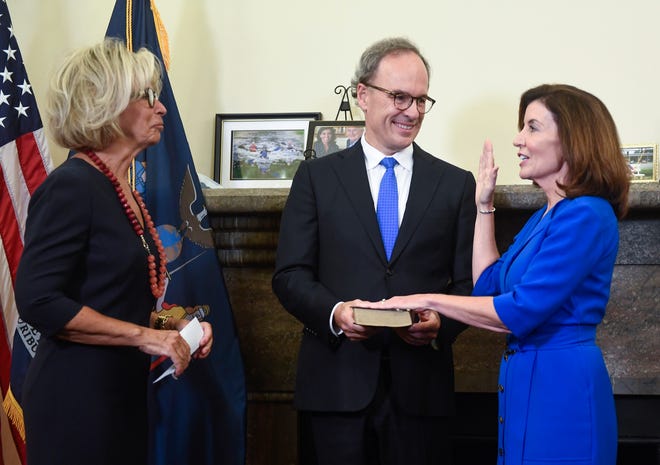 Hochul, a Democrat, was sworn in as the state’s 57th governor during a private ceremony at the state Capitol, where the oath of office was delivered by Janet DiFiore, the state’s chief justice.

Cuomo’s resignation took effect at midnight, hence the inauguration took place overnight. According to Hochul’s office, a small ceremonial swearing-in will take place at 10 a.m. Tuesday, followed by an inaugural address at 3 p.m.

Hochul, a Buffalo native, has served as New York’s lieutenant governor since 2015.

Cuomo announced his intention to resign two weeks ago, amid a slew of scandals rocking his government, including the revelation of a state probe finding he sexually harassed 11 women.

Hochul will be the first governor from outside the New York City metropolitan area in a century and the first woman to hold the position.

“The commitment I make to all New Yorkers, right now and forever: I will fight like hell for you every single day like I’ve always done and always will,” Hochul declared at a news conference the day after Cuomo announced his resignation plans.

Hochul has worked at the state, federal, and local levels.

Following David Paterson’s historic succession of Eliot Spitzer in 2008, Hochul’s inauguration marks the second time in 14 years that a New York lieutenant governor has risen to the top executive office.

Hochul, a long-serving political official, brings a wealth of state, local, and federal expertise to her current position.

Hochul previously served in Congress for 18 months, from 2011 to 2013, gaining an upset victory in a special election but losing her re-election effort after the district was redrawn.

She previously served on the Hamburg town board and as a congressional staffer before becoming Erie County clerk from 2007 to 2011.

Hochul’s election as governor, according to Sonia Ossorio, head of the National Organization of Women’s New York chapter, is noteworthy, but it also highlights the country’s present absence of female governors.

According to the Center for American Women and Politics at Rutgers University, Hochul became the 45th woman to serve as governor of any state.

During the pandemic, she said women have been “devastated” in the economic and job market. They require job possibilities so that they may “go to work knowing that their children will be safe at school.”

“For the first woman governor of New York to focus increasing women’s economic possibilities would be really significant,” Ossorio said. “And (Hochul) won’t be able to do that unless she defeats the delta variation.”

Prior to her first day as governor, Hochul made a pair of significant government appointments on Monday.

Karen Persichilli Keogh was named secretary to the governor, a strong position that some consider being the most powerful non-elected position in state government.

Persichilli Keogh was a former adviser to then-Senator Hillary Clinton, acting as New York state director and campaign manager at one point. She worked in the private sector most recently as the head of worldwide philanthropy for JPMorgan Chase & Co.

“Whether it’s defeating COVID, getting more people vaccinated, or boosting our economy, as governor, I will build a strong team to turn the turnaround on the pandemic and serve the greatest interests of New York,” Hochul said in a statement Monday.