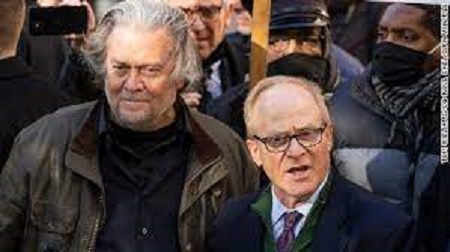 Meadows attempts to play both sides—insisting he wants to be helpful to the committee, then turning defiant when faced with live questioning—is also likely a time-wasting measure. His goal, and that of other Trump allies, it seems, is to run down the clock on the committee, perhaps in the hopes that its work will get tied up in legal fights that extend into the next Congress, when a potential GOP majority would surely shut it down.

Even if Meadows avoids a face-to-face encounter, House investigators aren’t finished with him. They want to proceed with the former North Carolina congressman’s scheduled interview on Wednesday and may seek criminal contempt charges if he fails to appear, setting up a legal dispute that might land him in court, similar to that of fellow Trump associate Steve Bannon.

For the time being, though, the select committee overseeing the investigation into the armed assault on the Capitol has committed to continue finding the truth despite Trump loyalists’ efforts to obfuscate it. The procedures in which Meadows was set to take centre stage will continue, Democratic Rep. Bennie Thompson of Mississippi and Republican Rep. Liz Cheney of Wyoming, who chair the committee, said in a joint statement in reaction to Meadows’ decision.

We had obviously hoped that Mr. Meadows would continue to engage with the committee. However, based on his lawyer’s letter today and his intention to skip the deposition, it creates a new dynamic “Thompson stated later that day. “We were prepared to go with contempt sooner, but we suppressed it because we felt we’d agreed to work together. That was not the case.

Despite his last-minute change of heart, Meadows may have already provided the investigators with additional information of relevance in the shape of 6,000 pages of records. According to a person familiar with the situation, the data currently in the committee’s hands include exchanges from January 6, and that, while the specifics are unknown, “several individuals knew Meadows’ mobile phone” number.

Democratic Rep. Pete Aguilar of California provided further facts late Tuesday, telling CNN’s Annie Grayer that papers Meadows had previously provided the committee contain proof that he was in contact with “individuals who were involved for the organisation of (the January 6 event).”

When asked why he thinks Meadows abruptly chose to remain silent, Aguilar surmised that it was an attempt by Meadows to restore or salvage what’s left of his relationship with Trump.

“Perhaps problem was with his book tour,” Aguilar speculated. The former President’s stance was the only thing that actually altered. According to news accounts, the former President was dissatisfied with Mr. Meadows, and many of these people, as we saw on January 5 and 6, just did whatever the old President desired.

One additional information that Trump most emphatically did not want made public came to light on Tuesday, with Meadows serving as the messenger once more. The former President’s blood oxygen levels plummeted to a “dangerously low level” immediately after he disclosed he had tested positive for COVID-19 in October 2020, according to a newly released excerpt from his tell-all biography, “The Chief’s Chief.” This follows Meadows’ telling in the book, among other surprising details, of how Trump went fishing for a negative test result following a previous positive before of his first debate with then-candidate Joe Biden.