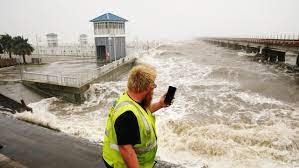 Louisiana: Forecasters warned that the system, which was fueled by exceptionally warm waters in the southeastern Gulf of Mexico, was expected to quickly intensify Saturday and could make a direct hit on the state Sunday afternoon or evening with potentially life-threatening storm surge, fierce flooding, and catastrophic 140-mph winds.

The acting deputy director of the United States National Hurricane Center in Miami, Jamie Rhome, announced on Saturday. “If you live in coastal Louisiana or Mississippi, you must act quickly because today is the last day for safeguarding life and property.”

Many people appeared to have heeded the warning, as traffic-congested highways westward early Saturday, especially out of New Orleans, and petrol stations were crowded.

“Rapid strengthening is likely over the next 24 to 36 hours, and Ida is expected to be an extremely hazardous major hurricane as it hits the northern Gulf coast on Sunday,” the National Hurricane Center said on Saturday.

Heavy rain from Ida will begin to fall on the Louisiana coast Sunday morning, according to the center, before moving northeast into the Lower Mississippi Valley later Sunday and into Monday. Through Monday, total rainfall accumulations of 8 to 16 inches are possible in southeast Louisiana and southern Mississippi.
The center also warned that “very life-threatening storm surge inundation could reach 10 to 15 feet above ground level within the area extending from Morgan City, Louisiana, to the Mississippi River’s mouth.”
“In the warning area along the northern Gulf Coast, preparations to safeguard life and property should be hastened to completion today,” the center stated.

The maximum sustained winds reached 100 mph on Saturday afternoon.  said it was situated 380 miles southeast of Houma, Louisiana, and was moving northwest at 16 mph.

New Orleans Mayor LaToya Cantrell requested voluntary evacuations, citing the storm’s rapid intensity. “The city cannot issue a mandatory evacuation order because we do not have the time,” she explained.

Residents were warned by city officials to prepare for extended power outages. Collin Arnold, the city’s emergency management director, stated that the city could be subjected to severe winds for up to ten hours.

New Orleans already ordered mandatory evacuations for coastal towns not protected by the city’s levee system. Officials have warned that floodgates on two roadways near the city would be closed on Saturday.

New Orleans Mayor LaToya Cantrell stated that she is “extremely confident in our levee protection system,” something the city lacked when Hurricane Katrina struck.

With the storm’s forward pace slowing and intensity increasing, Ida’s surge might breach certain levees that protect areas of New Orleans on the Mississippi River’s west bank, according to Heath Jones, emergency manager for the Army Corps of Engineers New Orleans District.

However, he stated that they are built to be overtopped and have safeguards in place to prevent further damage. Storm surge does not appear to be a threat to the levees, which were constructed after Katrina and protect the city’s east bank, which comprises the majority of the city, he said.

Nonetheless, Ida’s projected landfall on the same day Katrina hit jangled the nerves of many Louisiana residents as they queued for groceries, gas, and sandbags.
Ross Eichorn, a fishing guide on the shore about 70 miles southwest of New Orleans, expressed concern that the Gulf waters might “create a monster” out of Ida. “With a direct impact, there’s no saying what, if anything, will be left. Anyone who is unconcerned has something wrong with them.”
Wondell Smith, a retired police officer who worked on the force during Katrina, said he and his family planned to stay but were also preparing to move further inland if the forecasts deteriorated. He packed his SUV with water, bread, and sandwich meat.

Ida made its first landfall on Cuba’s southern Isle of Youth on Friday afternoon.

In the eastern Pacific, Hurricane Nora formed early Saturday on a predicted path that would bring it close to Puerto Vallarta, Mexico, before moving on to a close brush with resorts at the tip of the Baja California Peninsula by Monday.