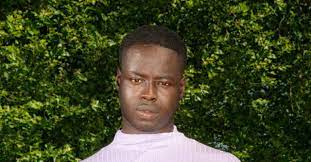 Above and Beyond the Covers

Ibrahim Kamara art frequently veers between raw realism, pop-cultural cliches, and the alternate realms he constructs. One of his first Dazed covers had dressed Nigerian demonstrators hoisting their national flag; another featured a young Black man in a Gucci tracksuit and hightops receiving an injection with the text “Freedom Is Coming But Where Are We Going?” Inside, an astronaut, a slouching skater, a Rastafarian, an airline captain, and a businesswoman waited in line to be vaccinated by a man wearing a visor.

“Thank God Ib was not born in the United Kingdom,” remarked Dazed executive editor Lynette Nylander. Ms. Nylander, a former deputy editor at i-D and Teen Vogue, was hired alongside Ibrahim Kamara, who is dyslexic and does not speak English fluently. When they met in 2016, they bonded over their shared Sierra Leonean ancestors.

“There aren’t a lot of us in fashion,” Ms. Nylander explained. “But Ib has always been a bit of an outcast, taking a nonconformist viewpoint from the outside world and bringing it within the fashion industry. He has such an inherent sense of the future and employs so much colour that his thoughts become virtually impossible to dismiss.”

Both editors discussed the difficulties of filming content in the midst of a pandemic, especially when working with a young crew spread across time zones. Ibrahim KamaraMr. Kamara, whose commercial work for luxury companies frequently had budgets many times that of his magazine efforts, has said that the difficulty of “learning how to be creative with nothing” has reminded him of his university days.

His September edition, which was released last week, is far from amateur, having three covers starring Rihanna, one of the world’s most renowned women. In one, she adopts an Amazonian attitude in a gold snakeskin bodysuit, while in another, she wears a forest green Louis Vuitton helmet over a Marge Simpson-style Afro wig. On the third cover, she stands erect with a walking stick, dressed in a Burberry string bikini, trench, and thigh-high boots. She’s wearing an umbrella, a humorous homage to one of her most popular songs. The tagline is “The Reign Never Ends.”

Ibrahim Kamara, who previously worked on an ad campaign for Rihanna’s clothes and cosmetics line Fenty, styled the singer remotely. In an inside shot, she is wearing a hooded cotton and canvas garment designed by Jamaican designer Jawara Alleyne that is structured like a marijuana blunt.