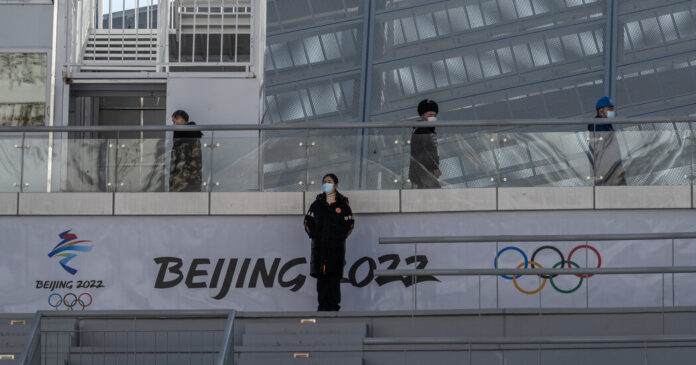 Athletes make own rules as the Olympics are near but China tightens the Olympic rules. Athletes and sports officials from all over the world have been looking at the Winter Olympics in Beijing, which are set to start in February, with a mix of fear and tiredness for months. Now, there has been a huge rise in cases around the world that are linked to the highly contagious Omicron variant. This has given them even more reason to be on their guard.

In other words, a single positive test before the opening ceremony on February 4 could end an athlete’s whole career. An outbreak in China could still stop the whole Olympics.

Karen Chen, an American figure skater, said that with the new version out there, it’s a little scary. “I know it’s been going around. It’s all we can do to clean our hands, wear a mask, and hope for the best.”

China has already taken a lot of steps to make sure that the coronavirus doesn’t spread to its own people or to people who are at the Winter Olympics, and to make sure that the two groups don’t come into contact with each other. On Thursday, as athletes around the world kept planning the safest ways to get to the Olympics, China announced some of the strictest Olympic rules yet for its own people, too.

They will be able to clap, but not shout, in support of the athletes at the Winter Olympics, which were already only open to people from China. They won’t be able to leave the Olympic venues to go home and see their families. As for any Olympic participants who go outside of this area to other parts of China, they will have to spend at least one week in quarantine before they can go back to their homes.

Some infections are almost certain to show up at the Olympics, where everyone will have polymerase chain reaction (P.C.R.) tests every day.

China has stopped foreign spectators from coming into the country. It is allowing foreign athletes, trainers, coaches, referees, journalists, and a few others who have been vaccinated to come into the country without having to spend two or more weeks in quarantine and a week at home.

There is a very strict condition that foreigners stay in a “closed loop” of hotels and sports venues that are linked by special buses and trains.

This is the bottom line: “We must never go outside the closed loop, let alone reach the city level.” This is what Huang Chun, the deputy director of the Olympic organising committee’s Office of Epidemic Prevention and Control, said.

It was still the most important goal for people who lived outside of China.

Many people are now taking steps to keep the virus at bay before they leave for Beijing. As an example, the U.S. Olympic and Paralympic Committee wants its athletes to get booster shots, but they don’t require it. The British Olympic Association said it was also recommending that its athletes get boosters “where possible.” Some teams are going even further, telling athletes to try to get the Moderna booster after the company said that early studies looked like they found it to be a little more effective against the Omicron variant. Several other studies have said that those findings are more hopeful than real, because the Moderna and Pfizer vaccines aren’t available in many parts of the world.

A positive drug test on the eve of the Olympics was heartbreaking for many athletes and teams, though. That fear has caused big and small changes.

Speedskating is a popular sport in the Netherlands, but next week the country’s national trials will be held behind closed doors. Only teams and a few members of the news media will be allowed to enter the rink.

In Austria, a group of American biathletes who are training at a high-altitude camp in Ramsau am Dachstein have been sending a single staff member to the grocery store on a few occasions with a big shopping list that includes all of the athletes’ requests. This is part of an effort to keep the athletes from being exposed.