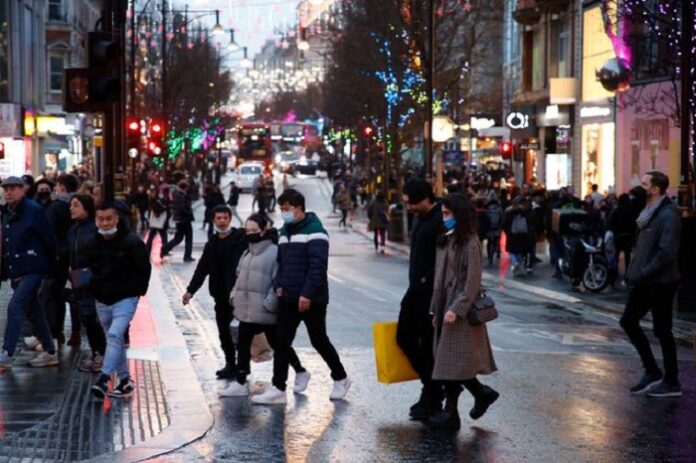 According to a Wall Street Journal analysis of Johns Hopkins University data, states reported 512,553 cases on Monday, the most for a single day since the pandemic began, as states caught up after taking a break for the Christmas holiday. The total brought the seven-day average of reported cases to 237,061, 15,000 less than the pandemic high set about a year ago.

The Monday report omitted North Carolina, South Carolina, and Rhode Island, which remained on hold. This gap, along with more blackouts in reporting over the New Year’s weekend, are expected to muddy the picture of the pandemic’s trajectory until January, when reporting resumes.

Covid-19 testing was also less common earlier in the pandemic, making comparisons of case-rates from one surge to the next more difficult. Tracking Omicron’s spread in the United States has been difficult for public-health officials, as it has been for previous variants. The CDC estimated on Tuesday that the Omicron variant was responsible for 59 percent of new infections in the week ending December 25 and 23 percent in the week ending December 18. The CDC estimated last week that Omicron was responsible for 73 percent of infections in the week ending December 18. The CDC stated on Tuesday that the most recent figures were within the parameters of its statistical model and that the trend of Omicron’s increasing prevalence among U.S. cases is clear.

The CDC also released a review of a recent cluster of Covid-19 cases in a family of six in Nebraska on Tuesday. The cases show that The Omicron variant can infect people who have previously been infected, and that it causes milder symptoms in some people who have some immunity, either from a vaccine or from previous infection. Furthermore, The Omicron variant appears to cause symptoms sooner—in about three days after exposure, rather than five or later, according to the agency.

The first suspected case in the cluster was a 48-year-old man who returned from Nigeria on Nov. 23 and began experiencing Covid-19-like symptoms the next day. By December 1, all six family members had tested positive for SARS-CoV-2 PCR, and sequencing confirmed the Omicron variant in each case. Five members of the family had confirmed infections about a year ago, including the only person who is fully vaccinated. They all had symptoms that were similar to or milder than those they had experienced during their previous infection. Cough, joint pain, congestion, fever, and chills plagued the one unvaccinated family member who did not have a confirmed infection. According to the CDC, no one in the family was hospitalised.

The Centers for Disease Control and Prevention (CDC) reduced the recommended isolation period for people infected with Covid-19 from ten to five days on Monday. The new guidance reflects growing evidence that people with the virus are most infectious one to two days before symptoms appear and two to three days afterward, according to the agency, as well as concern about the disruption caused by staff shortages in the travel and healthcare sectors.

The CDC now says that infected people who are asymptomatic can leave isolation after five days and should wear masks when around other people for another five, while those who have been vaccinated and are exposed to Covid-19 should wear a mask for ten days and try to get tested five days after exposure.

If the CDC’s new guidelines are followed, people may be able to return to work sooner and avoid snarling key industries. Thousands of flights were cancelled over the Christmas holiday, and officials in the United States and elsewhere have expressed concern about the impact of quarantines on hospital staffing levels.

The FDA stated on Tuesday that some antigen tests, which are the foundation of many at-home rapid tests, can detect the Omicron variant but “may have reduced sensitivity” to it. The findings are the result of a collaboration between the FDA and the National Institutes of Health’s RADx programme to evaluate how well antigen tests detect Omicron in infected patients’ samples. Antigen tests are known to produce false negative results on occasion.

The mayor, the governor, and incoming Mayor Eric Adams announced Tuesday that children will return to public schools on Monday while increasing testing capacity and making it easier for children who have been exposed to stay in school.

According to research conducted in South Africa and the United Kingdom, Omicron causes a milder form of Covid-19 in vaccinated people than previous strains; shoppers in London on Monday.