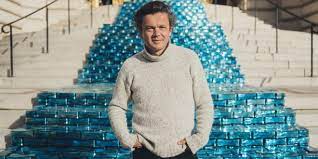 PARIS — A Glittering Honor for a Master of Glass

On Wednesday, the artist Jean-Michel Othoniel was inducted into the Académie des Beaux-Arts, one of France’s most prestigious cultural institutions.

The academy’s recruits, known as “Immortals,” typically wear a classic interpretation of the green-embroidered uniform first required under Napoleon. Othoniel dressed to the nines in Dior.

Othoniel gleamed like the coloured glass bead sculptures for which he is famed as the event progressed beneath the gilded dome of the Institut de France.

The designer created an unusual design for the olive branches that customarily adorn the costumes of the immortals. A team of Dior workers lavishly stitched the branches onto the breast, lapels, cuffs, and waist of Othoniel’s black tailcoat and pants with glossy gold strands and green silk, concluding their design with tiny glass pearls.

“It’s more than just a piece of clothes,” he explained to his fellow immortals and guests. “It’s a protecting and engulfing sculpture.”

These are heady times for the 57-year-old master glass manipulator, who shot to fame in 2000 when he transformed the entrance to the Palais Royal Metro station here into a double canopy of coloured glass beads.

His election to the famous French academy coincides with the opening of “Narcissus’ Theorem,” a major retrospective of his work at the Petit Palais, which began last week and will be on display until January 2, 2022. More than 70 paintings are on display in the museum’s halls and garden for the first time in France, ten years after his last retrospective at the Pompidou Center.
The Petit Palais, created as a monument to Beaux-Arts beauty for the Universal Exposition of 1900, is the right location for Othoniel’s cheerful reworking of the tale of Narcissus, who died amorously staring at his own reflection and was revived as a flower.

“My responsibility as an artist today is to bring amazement and enchantment,” Othoniel stated as he walked around the show. “I questioned myself, ‘What is the Petit Palais’ Mona Lisa, what is the masterpiece?’ and finally realised that the masterpiece is the architecture itself.” So I built a relationship between my sculptures and this dream machine.”

Othoniel combined 1,000 aquamarine-colored glass bricks created by craftspeople in Firozabad, India, at the museum’s entrance, on the grand stairway leading up to a carved stone arch and gilded bronze gate. The installation, titled “Blue River,” greets visitors as it pours down to the sidewalk below.

The artist’s most known works are sculptures in which he strands together large colourful mirror-glass baubles created in a Basel, Switzerland studio. Othoniel has hung gold glass necklaces from trees and placed enormous gold lotuses in reflecting pools in his garden.

“Jean-Michel is a poet as well as a sculpture,” said Christophe Leribault, outgoing director of the Petit Palais who takes over as head of the Musée d’Orsay on Oct. 5. “We’ve never given an artist such broad leeway.”

Othoniel grew up in a humble middle-class household in Saint-Étienne, a town in central France with active coal mines during his infancy. “It was a really sad, terribly uninteresting town,” he reflected. “It wasn’t conducive to daydreaming.” He sought refuge at the town’s small but excellent contemporary art museum, the Musée d’Art Moderne et Contemporain.
During their summer holidays, his parents drove around Europe visiting museums. His frequent visits to an aunt and uncle’s home in Andalusia exposed him to the beautiful architecture and alluring power of southern Spain. “It was magical for a tiny boy to cross kilometres of orange trees and smell the perfume of orange flowers,” he remarked.

Othoniel left Saint-Étienne for Paris when he was 18 years old. He spent a year working in a tiny, independent art studio before enrolling in the École Nationale Supérieure d’Arts de Paris-Cergy outside of Paris. In the 1980s, the school was emerging as a hub for conceptualism and mixed-media endeavours.

“It was truly an experimental school, with classes ranging from photography, design, and poetry to literature, English, painting, and sculpture, all mixed together,” he remarked.

Othoniel experimented with wax, sulphur, and obsidian in his early years as a sculptor before settling on glass. He still works in obsidian, a black volcanic glass, on occasion. He received his own version of the ritual sabre during a sword presentation that followed his entrance as a “immortal” on Wednesday. He carved its broad blade from obsidian, and its large double-knotted bronze grip was fashioned by his 33-year companion, Belgian sculptor Johan Creten.

He shares an apartment in the Marais district with Creten. They’ve been working together for the past eight months out of a massive red brick building built more than a century ago as a metallurgy factory in Montreuil, a Paris suburb. The main work and exhibition space for Othoniel’s sculptures is housed in a massive hall with a cast-iron and glass roof. There are offices, a storage facility, a workshop, conference rooms, and a photography studio.

Othoniel has achieved success in the art world as well as in the Paris fashion scene. In 2003, he had a solo exhibition at the Fondation Cartier. He has been commissioned by Louis Vuitton and Chanel. Diptyque, the cult perfume house, made a “Othoniel Rosa” scented candle and eau de toilette.

Othoniel claimed he had long resisted joining the Académie, which he saw as a stodgy governmental organisation for elderly and safe artists, until some younger members persuaded him otherwise.

He has now accepted his new role as a cultural leader in France. He was recently named director of the Villa Les Pinsons, a cultural residence for 15 young artists in Chars, 30 miles north of Paris, owned and administered by the Académie since the 1950s.

“I want to modernise the Académie, to work to communicate what we know to the new generation — and to help the older ones as well,” he stated. He joins the likes of photographers Yann Arthus-Bertrand and Sebastio Salgado, as well as architect Norman Foster, in an exclusive group. Othoniel’s generous gesture will leave a permanent impression on the Petit Palais long after the exhibition finishes.

Othoniel observed the dome above the museum’s great Art-Nouveau stairway was bare while scoping out the museum rooms for the event. “At the top of the ceiling, there was a very small hole. “And I thought to myself, ‘Ah, if there’s a hole, it’s because something was hanging here once,” he explained.

He remembered “The Crown of the Night,” a hanging sculpture made of coloured glass beads that he had built years ago in a forest in the Netherlands and then stashed away in crates. The sculpture fit well in the Petit Palais area, so much so that Leribault, the museum’s director, declared he would buy it and hang it permanently if the museum could find the funds.

“So I said to Christophe, ‘Listen, I’m ready to give it to you!'” According to Othoniel. “Because the Petit Palais is a free museum, anyone may come whenever they want, even if it’s only for five minutes, to see my Crown.”

“It was destiny,” he added. “Destiny. It was unavoidable.”