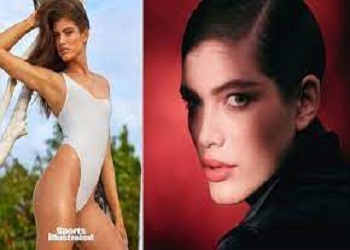 MILAN — Valentina Sampaio is Armani Beauty’s newest face. The Brazilian transgender model and activist, 26, will appear in the brand’s 2022 beauty advertisements, which will be shot by Swedish photographer Mikael Jansson.

“Armani Beauty represents my view of what beauty should be today: meaningful and multifaceted.” “My beauty products, like my garments, strive to inspire all women, regardless of culture, place of origin, or background,” Giorgio Armani said in a statement, complimenting Sampaio’s “passion, devotion, and perseverance.”

“Valentina isn’t scared to speak up, and her remarks are meaningful and heartwarming,” the designer continued.

“As a trans woman, this collaboration is a great milestone and a personal dream come true for me,” Sampaio said, emphasising how “makeup has played such a meaningful role in my personal evolution” and praising Armani Beauty for “embracing diversity, enabling creative expression, and empowering individual beauty.”

Sampaio, in particular, will appear in the advertising campaign for Lip Power, the brand’s latest lipstick, which was released in Europe and the United States in September and will be available in China early next year. The Lip Power collection, created in collaboration with Giorgio Armani international makeup artist Linda Cantello and the brand’s beauty licensee L’Oréal, includes 25 highly pigmented shades presented in a slender tube and drop-shaped bullet that facilitates quick application and precise contouring of the lips.

Sampaio’s modelling career began in 2016 when she appeared at So Paulo Fashion Week and has since increased in recognition. Her career has featured numerous historic milestones, such as becoming Victoria’s Secret’s first transgender model, signalling a wind of change at the innerwear company, and becoming the first transgender model to appear on a global Vogue cover, on the March 2017 edition of French Vogue. Sampaio has since appeared in various glossy publications, including foreign versions of Vogue and Elle, as well as Vanity Fair Italy and Marie Claire Brazil.

Armani guest edited a special edition of Harper’s Bazaar Spain in November 2020, with Sampaio on the cover alongside the designer himself. She was also included in the V and VMAN 2021 calendar, which was made in conjunction with Emporio Armani to commemorate the 40th anniversary of the company.

Sampaio made her Met Gala debut in September, donning a crimson-hued Iris van Herpen gown, and raised awareness for the LGBTQ community with an NFT and short video. As previously reported, the model collaborated with Lions Management and blockchain firm Lukso to generate digital assets that would assist a variety of LGBTQ charities, including the Ali Forney Center, GLAAD, and Pride Live.

Sampaio joins celebrities such as Cate Blanchett, who has been the face of the S scent series from its inception in 2013 and elevated to the position of the brand’s first global beauty ambassador in 2018, representing cosmetics and skin care as well. Other brand ambassadors include actors Ryan Reynolds, Jackson Yee, Nicholas Hoult, Zhong Chuxi, Adria Arjona, Alice Pagani, Greta Ferro, and Barbara Palvin and Madisin Rian, as well as models Barbara Palvin and Madisin Rian.