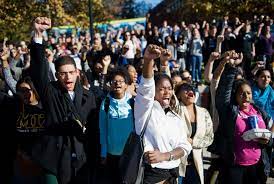 The Mizzou protests: While racism and threats to the physical safety of black students are the most pressing issues at the University of Missouri, a debate over the media’s rights and responsibilities has raged all week.

As you may be aware, the chancellor of the University of Missouri and the president of the state system resigned amid mounting outrage over the administration’s delayed and tone-deaf response to a series of racist incidents and what black students describe as a dangerous and hostile environment on campus.

The Maneater, the student news outlet, has a timeline of the escalating tensions on campus, and the New York Times has an article about the two resignations. When demonstrators organised by the group Concerned Student 1950—whose name refers to the year blacks were ultimately admitted to Mizzou—were celebrating the resignations on campus’s Mel Carnahan Quadrangle and pledging to continue fighting, “This is only the beginning of removing oppressive structures in higher education, particularly the UM system,” Marshall Allen of Concerned Student 1950 told CNN.

Tim Tai, a Mizzou student photojournalist on assignment for ESPN, got into an altercation with protestors near the tent city they’d built up on the quad as a “no media safe place.” Mark Schierbecker captured the incident on film, and the footage quickly went viral.

Some of the people in the video who tried to keep Tai and Schierbecker away from the demonstrators were either Mizzou employees or faculty. Some of them eventually apologised and could face disciplinary action. The most interesting aspect of the episode, however, was the disagreement between Tai and the demonstrators, which has since been widely publicised on the internet.
The Mizzou protest argue that Tai, as well as all media outlets, should respect their desire to keep the media out of their “safe place.” Tai’s point is summarised in his comment at 1:45 of the video: “The First Amendment protects your freedom to be here, as well as mine.” He adds at one point that the Carnahan quad is designated as a public park under state legislation.

Tai, whose images were published by ESPN.com, was praised by numerous journalists around the country for maintaining his calm while defending his journalistic rights. On the other hand, the reasons advanced by Tai and others who backed him were heavily condemned by others, who stated that regardless of journalists’ rights, they have a need to treat subjects more properly, particularly subjects who are in danger, agony, or both. “I think we underestimate how badly broken our (media) connection is with minority communities,” tweeted Wesley Lowery of the Washington Post.

My initial instinct to Monday’s confrontation was to side solidly with Tai. I thought the demonstrators’ acts upsetting. Their argument that they had the authority to restrict anyone from the quad because they had declared it their space was ludicrous in my opinion.

I also thought they were being undemocratic in that, having won a victory, they were bullying their newfound power. In the final seconds of the film, a swarm of demonstrators walking in a close formation force Tai entirely out of the frame. “Isn’t it our right to walk forward?” one woman asks. “I believe it is my right to proceed.” I’ve known fourth-grade bullies who were far more subtle.

One thing I am certain of is that I have had to reconsider some of my preconceptions. The writer whose tweets I did not include above has claimed that tweets from non-public personalities should not be deemed fair game for journalists to reprint. This is not a novel or unusual concept. Here’s a Slate storey from last year by Amanda Hess about an issue about the privacy of public, or unprotected, tweets.
The notion that journalists should respect the “privacy” of tweets that have been published online and deemed public is analogous to the notion that journalists should respect the privacy of an area carved out by a group of individuals, even if that space is on public ground.

Both of those ideas are problematic to me. But I understand them better now than I did a week ago, and as you can see from these last few words, I’m more willing to respect the desires of individuals who subscribe to them than I used to be.

Social media is altering perceptions and boundaries of what is public and private. Those definitions are also prone to change in what my generation refers to as the “real world”—as if social media weren’t a part of it. We don’t have to agree on all of the definitions. A wise, ethical writer, on the other hand, must recognise that those conflicts are legitimate and should be taken into account.