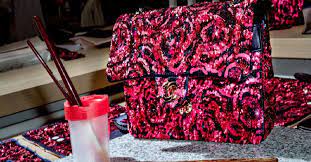 The characteristic flap of Hand-Beaded Chanel Bag can be traced back to February 1955, when the house’s creator, Gabrielle “Coco” Chanel, designed her first pocketbook with a shoulder strap. The handbag, dubbed the 2.55 (to mark the month and year it was debuted), had feminist roots, as did most of her ideas: the strap allowed women to keep their hands free rather than gripping a handle. Karl Lagerfeld, the label’s longtime creative director, quietly altered the 2.55 in 1983, replacing the basic twist Mademoiselle clasp with interlocking C’s, among other changes.

The reworked bag was titled the 11.12, after Lagerfeld’s medium-size counterpart, the A01112. While the design of the purse has stayed unchanged throughout the decades, Chanel has continued to iterate its embellishments, leveraging the house’s small specialty craft ateliers known as Métiers d’art.
This latest version of the 11.12, beaded with an abstract bouquet of camellias, Coco Chanel’s favourite flower, is one of the most elaborate and luxuriant yet. The handbag’s lambskin components are cut by a subgroup of artisans who have been trained for at least six years in the 200-person facility in Verneuil-en-Halatte, 90 minutes north of Paris.

The pieces are then transported to the Lesage needlework business in Paris, which was founded in 1858 and purchased by Chanel in 1990. Two embroiderers work on each purse for more than a week, attaching a tapestry of beads and Swarovski crystals in colours of strawberry, fuchsia, and navy, in forms like miniature cups. They employ the Lunéville tambour hook technique, named after the town in Lorraine where it first appeared around 1810 after travelling the Silk Road from Asia. The design was designed by Virginie Viard, 59, who took over after Lagerfeld died in 2019 at the age of 85, but the embroiderers, who also work on couture gowns, adjust each slightly, so no two bags are exactly the same.

After the embroidery is finished, the parts are returned to Verneuil so that the bag may be assembled into its signature rectangular shape, with ornate piping and squared-off sides to fit the complex beading. Almost all of the work is done by hand, and even the little areas sewn by machine are worked on with an old-fashioned manual device from Coco Chanel’s time. In an age when machines walk the production floor, the precisely created, lavishly embellished handbags that result from this laborious procedure remain well beyond industrialization’s greedy grasp.