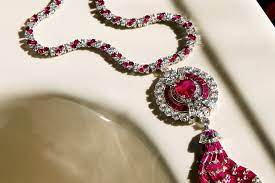 A Bulgari Necklace With a Jazz Age Flair

The tassel has been used as a decoration since the time of the ancient Egyptians — one made of gold and silver was discovered in Tutankhamen’s tomb — but its heyday for fine jewellers was the 1920s, when hemlines soared to the knee and waistlines and necklines dropped. The flapper’s boyish silhouette became the ideal, resulting in the adoption of the sautoir, a long necklace that frequently ended in a tassel and was strung with tiny pearls or jewels and nestled against the breastbone.

It could be twisted languidly while standing in refined conversation during cocktail hour – a ritual born during that heady era. Bulgari, the Rome-based firm founded in 1884 by Greek silversmith Sotirio Bulgari, was responsible for classic renditions of such Jazz Age passementerie and has never stopped developing the form. The focal point of this new jewel-encrusted convertible sautoir is a hanging tassel, which can be worn nine ways, including as a brooch, Bulgari necklace, or choker, and boasts a 10-carat antique cushion-cut ruby from Mozambique.

It is designed to shimmer in the night air, like the light at the end of Daisy Buchanan’s dock in “The Great Gatsby.” Bulgari Magnifica High Jewelry necklace, (800) 285-4274, pricing on request.