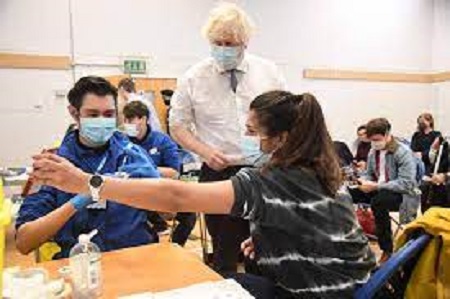 The first death with Omicron was recorded in the United Kingdom on Monday, according to Prime Minister Boris Johnson, as the country confronts a “tidal wave” of cases of the new strain.

It was unclear if the variation was the cause of death with Omicron or where the person caught it. The individual was diagnosed at a hospital, according to the UK Health Security Agency, but no information about his or her vaccination status was provided.

According to the United Kingdom’s health service, there are presently roughly 200,000 daily Omicron infections in the country, with 4,713 verified instances of the variation. In England, the variation currently accounts for more than 20% of Covid-19 cases.

It further said that ten patients, ranging in age from 18 to 85, have been hospitalised with Omicron in various regions of England after being diagnosed on or before admission. The majority had got two doses of the vaccination.

Mr. Johnson said the death with Omicron served as a reminder of the dangers that the government confronts as it rushes to provide a third Covid-19 vaccine shot to the adult population by the end of the year. More than 23 million individuals, or around 43% of those eligible, have gotten a booster injection so far. Mr. Johnson added, “We can see Omicron spiking now.” “We have to put the concept that this is a milder variant of the virus to one side.” Mr. Johnson warned that by Tuesday, the highly transmissible strain will be responsible for the bulk of Covid-19 infections in London. The number of Omicron cases is increasing every two to three days, according to the authorities.

To gain time to vaccinate its population, Britain imposed a slew of social-distancing measures this week, including requiring individuals to work from home and provide proof of vaccination or a negative Covid-19 test to enter select establishments like nightclubs. Even with these limits in place, according to recent modelling by the London School of Hygiene & Tropical Medicine, hospitalizations might peak in January, with between 1,700 and 3,600 people hospitalised every day. There were roughly 4,000 hospital admissions per day during the last big Covid-19 epidemic in the United Kingdom.

In the worst-case situation, hospitalisation might be double that amount, according to epidemiologists at the institution. The researchers stated that “further control measures may be necessary to limit disease loads and safeguard healthcare services.” Early evidence suggests that the Omicron variety is better at avoiding vaccine-induced antibodies, and this has a lot to do with what’s going on at the molecular level. Daniela Hernandez of the Wall Street Journal explains.

Mr. Johnson refused to rule out the possibility of more Covid-19 limitations before the holidays. According to the authorities, Omicron might cause a million illnesses by the end of the year. It has sought the support of the army to provide vaccines. There have, however, been issues. A government website for free fast Covid-19 testing broke early Monday, while a website administered by the state-controlled National Health Service for arranging vaccines was swamped.