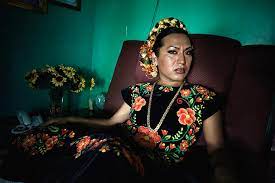 Portraits of Mexico’s Third-Gender Muxes in an Intimate Setting

Estrella’s hair is long, wavy, and jet-black. In the backyard of her house, among the chickens, hammocks, and weaves, she tries to tame it with a thick-toothed comb. Relatives come and go all around her.

Estrella is preparing for the yearly festival La Vela de las Auténticas Intrépidas Buscadoras del Peligro, or the Festival of the Authentic and Intrepid Danger-Seekers, which takes place in November 2015. She will compete for the title of queen of the ceremony with a community of fellow muxes — persons who are born male but embrace roles and identities associated with women.

Estrella and her family live in the southern Mexican state of Oaxaca, near the town of Juchitán de Zaragoza on the Isthmus of Tehuantepec. They are Zapotecs, a Mexican Indigenous people, and they are members of a community that has long embraced and celebrated them.

Many muxes take up traditionally feminine responsibilities in Zapotec society, including as cooking, embroidering clothing, working as hairdressers, completing home chores, and caring for children and elderly relatives. Estrella is one of them: in addition to her other interests, she designs the intricate needlework of traditional Zapotec garments, which are full of flowers and other natural features that add colour to every celebration or holiday on the isthmus.

“When I was five years old, my mother began to observe how I handled home affairs,” Estrella explains. “I scrubbed the dishes and the cloths; I was always eager to assist Mom.” But my father wouldn’t let me, so I had to do it in secret.”

When her father left the house, she would dress up in her sisters’ clothes and dance about the room, but when he returned, “the fantasy was over, and the spell was broken,” she says.

The concept of a distinct or third gender, according to sociologists, has existed in various Indigenous communities in North America, including among the Crow people, the Apache, and several other Native American groups.

Anthropologists have also found gender fluidity acceptability in pre-Columbian Mexico, citing reports of cross-dressing among Aztec priests as well as Mayan gods who were both man and female.

I initially learnt about Portraits of Mexico’s muxes while working on a series of gender identity projects in Cuba and Brazil. My first visit to Juchitán in 2014 coincided with a series of events in which everyone I encountered — young, old, men, women, muxes — danced, ate, and drank in joy. The days were long and powerful, filled with happiness and exhilaration. It was there, in the midst of the joy, that I first met the muxes.

When males show signs of effeminacy, some Zapotec mothers will start training them in traditional feminine roles. Similarly, many mothers do not reject young men who express an interest in jobs typically reserved for women.

Notably, muxe children have always been prohibited from leaving their parents houses to start their own families or live alone with their partners. Tolerance and acceptance appear to have boundaries even here.

Estrella decided to drop out of school at a young age in order to aid her mother, who was in debt, and to fund her siblings’ schooling. She helps her mum out in the market. She gives individual lessons in preparation for quinceaeras, 15th-birthday festivities that serve as rites of passage for females in several Latin American countries, when she is not teaching dance classes at school. She also designs and embroiders clothing and does housework.

But she isn’t working on the day I see her in late November 2015. It’s Vela day, and she’s spending her time preparing for the festivities. She intends to dress up and parade alongside the other muxes, some of whom have previously been anointed queens.

Estrella is noticeably nervous that night. Her voice is trembling, and she is scared her legs may give up on her. She says she wants to look exquisite and sparkle like a star – if only for a few minutes.

She dresses in a modern style, exposing one of her shoulders. She allows her hair to fall freely.

Thousands of people from Oaxaca and beyond attend the Vela. Throughout the night, costumed celebrants dance to live music while drinking beer and eating traditional Juchitán cuisine.

Estrella is delighted to be surrounded by her buddies. But what counts most to her is that her mother has joined her at the Vela, like she does at all of the parties she attends, she tells me.