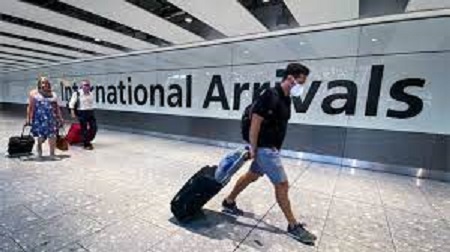 Nigeria has been added to the UK’s travel warning list as attempts to halt the spread of the Omicron strain of COVID-19 gain traction.

The move requires UK and Irish nationals and residents travelling from Nigeria to spend 10 days in a government-approved controlled quarantine facility.

As a preventative measure against the new variation, they must also acquire two negative PCR tests.

Currently, the great majority of cases in the UK have obvious linkages to international travel from South Africa and Nigeria, and 21 Omicron cases recorded in England in the last week had originated in Nigeria.

A temporary travel restriction has also been imposed for all non-UK and non-Irish nationals and residents who have visited Nigeria in the previous ten days, meaning they would be denied admission into the UK.

This does not apply to individuals who stayed on the ground and just transited through Nigeria to change planes.

Ten nations were added to the red list last weekend, and it was declared that all vaccinated travellers coming in the UK would be required to take two PCR tests and self-isolate until they had a negative result.

Since then, the geographical spread of Omicron has grown significantly, with 37 nations currently reporting Omicron cases and over 134 instances discovered in the United Kingdom.

Boris Johnson, the Prime Minister, has also announced that pre-departure screening will be reinstated.

According to a new study undertaken by the UK Health and Security Agency (UKHSA), the window between infection and infectiousness may be “shorter for the Omicron variation,” which boosts the efficacy of pre-departure testing by identifying positive individuals before travel.

According to the analysis, there is a clear evidence of Omicron’s existence in Nigeria, and some cases discovered in the UK have been related to travel from Nigeria.

In addition, the nation has extensive travel ties with South Africa. Nigeria, for example, is the second most popular destination for flights from Johannesburg.

The red list adjustments will take effect on Monday at 4:00 a.m.

Anyone arriving before this period is “highly encouraged to isolate at home,” and their household is also advised to self-isolate for 10 days beginning with their arrival in England, according to the government.

Affected persons will be notified and provided free PCR testing on the eighth day following their arrival.