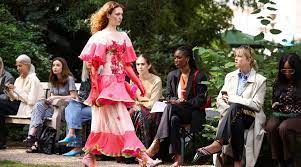 At first sight it appeared that London Fashion Week was back to business. On Friday, a massive industrial show hall was teeming with public relations and security personnel in headsets, brilliant floor-to-ceiling displays blaring social material (the venue was sponsored by TikTok), and closely packed rows of fashion glitterati.

They were out in force to honour Nensi Dojaka, the Albanian-born, London-based designer of painstakingly designed, barely there little black dresses who was named the latest laureate of the LVMH Prize earlier this month.

It was her first solo runway presentation, and the excitement was apparent, with a cautious optimism flowing from the mostly maskless local audience after 18 long and tough months. Everyone enjoys the London Fashion Week for the rise of promising newcomers. Especially at a time when the fashion industry is still feeling subdued and unmoored.

There was no great international audience, as there was during the New York collections. Certainly due to travel restrictions, but also to the exclusion of prominent names such as Burberry, Christopher Kane, and JW Anderson from the live schedule. That doesn’t mean the survivors weren’t keen to put on a performance — although on their own terms.

Roksanda Ilincic produced a “Women in Motion” dance recital at the Serpentine gallery in Hyde Park, with performers in billowing, shamelessly feminine volumes in coral, chrysanthemum, peridot, and merlot swooping and whirling to convey “the energetic brightness of change,” according to the show notes.

Harris Reed made a brilliant small-scale London premiere twenty-four hours later, in the same venue but under a full moon, with a gender-fluid collection of nine monochrome demi-couture gowns and tuxedos recycled from discarded bridal gear and morning suits purchased from Oxfam charity stores.

Osman Yousefzada, known for his sculptural tailoring and current social activism, was particularly concerned with the life cycle of clothes, presenting designs in a silk alternative fabric manufactured from sustainably obtained wood pulp. And Rejina Pyo launched her broadcast on Sunday with Olympic Team GB athletes diving from the London Aquatics Center’s diving board.

“I feel like the attitude surrounding us right now is about a need for freedom, and the place where I feel the most free is in the water,” Ms. Pyo, who is eight months pregnant with her second child, said. Models ran laps around the pool in her translucent shirting, swim-inspired separates, and see-through mesh dresses with photographic designs.

Motherhood, fresh life, and new beginnings emerged as recurring themes. Molly Goddard, who was on maternity leave following the birth of her son, presented a more approachable version of her signature supersized brand vision. She increased the sizes of wardrobe mainstays like wide-leg jeans and neon-hued Aran-style knitwear, as well as shrunken versions of some of her huge tiered smocked gowns, inspired by the smaller proportions of children’s apparel.

Then, in the shadowy cloisters of St. Bartholomew the Great, a medieval church in the back alleyways of one of London’s oldest neighborhoods, Simone Rocha, who had a daughter in May, delivered thoughts on mother-daughter relationships. Her layered white Holy Communion gowns, pearly decorations, vinyl biker jackets, and platform boots were all revisited.

“I couldn’t help but immerse myself into the work and be inspired by the experience,” Ms. Rocha said after her presentation, which moved several in the audience to tears and was notable for being the only one of the London season in which mask-wearing was encouraged at the doors. “I’ve had a lot of sleepless nights.” It’s been draining. But, in the end, I felt very honoured to be back and show in person, presenting my latest ideas.”

Richard Quinn had the week’s most star-studded front row, with Boy George and Kate Moss (who had come to see her daughter, model Lila Moss, begin the show) and the cameras that trailed them in tow. Mr. Quinn, a master showman, riffed on some of his unmistakable brand characteristics, including head-to-toe gigantic floral prints, studded and spiked leathers, and elaborate ball-gown skirts layered over tapered slacks. Mr. Quinn did, on occasion, err on the side of homage to other designers, especially Demna Gvasalia of Balenciaga.

So, how do we foster and promote the next generation of designers? Ms. Dojaka’s confident and sensual works nicely embody many young women’s desire to show off their bodies after months at home. Supriya Lele, for example, is an LVMH award finalist who explores notions of reveal and concealment through asymmetrical designs and naked skin.

Or Charles Jeffrey, another LVMH finalist, who invited the mayor of London, Sadiq Khan, to Electrowerkz, a cavernous industrial nightclub, for a glimpse of his rolling treasure trove of theatrical tailoring and glam-punk paint-splattered prints, modelled by an army of the city’s underground cool kids.

Mulberry, the British accessories firm, chose to commemorate its 50th anniversary by asking members of the new guard to rethink certain classic handbag styles while also allowing them the opportunity to come up with new ones. Following collaborations with Priya Ahluwalia and Nicholas Daley, the brand’s most recent was with Richard Malone, who draped a jewel-toned study of Irish craft heritage on models stalking through halls of Renaissance masterpieces at the Victoria and Albert Museum.

However, another, broader, industry mentality shift may be required: a true acceptance of internet showcases alongside physical catwalks as a means of seeing new fashion. It may be a difficult shift for people who are accustomed to enjoying the theatre and spectacle of the runway, or scrutinising fit and fabric up close. However, live exhibitions place a significant financial and emotional strain on designers, which was widely understood before to the pandemic. If the sector prioritises brand survival, habits will need to change.

Digital ingenuity was on full show. Matty Bovan’s multicoloured, maximalist crochet ponchos, knitted thigh-high socks, and upcycled-fabric ball dresses were given a (more) psychedelic twist than normal owing to a throwback 1970s-style short video and accompanying GIF look book. And Michael Halpern created a movie with principal dancers from the Royal Ballet School dressed in evening costume that allows them to fully express themselves in movement.

“I wanted to support the London performing arts scene, the dancers who endured so much with such incredible discipline and determination,” he said backstage earlier this month, standing next to color-block column gowns with box-shaped fringe, orb-shaped puffballs finished with Swarovski crystals, and fluid silky evening gowns. “After such uncertainty, I wanted to portray their satisfaction in being able to return, to stand, and to keep the wheels moving.”

A similar sentiment resulted in one of the week’s most moving moments. A storm rumbled overhead as guests gathered beneath the British Museum colonnades on Sunday night to commemorate the 15th anniversary of Erdem Moralioglu’s first fashion presentation. The designer enjoys drawing inspiration from eccentric figures in British history; this season, it was poet Edith Sitwell and aristocratic philanthropist Ottoline Morrell. Their influence inspired embroidered blossoms and vivid floral prints, cinched-waist Edwardian silhouettes and caps, romantic white lace gowns and shiny men’s tuxedo suits; an ode to survival and a love letter to the British capital’s eccentric soul.

Mr. Moralioglu stated in his show notes, “I feel so privileged to be an independent fashion label in London and am completely appreciative to all those who make it possible.”

A rare double rainbow broke through the clouds to hang triumphantly across the dark sky throughout the conclusion.