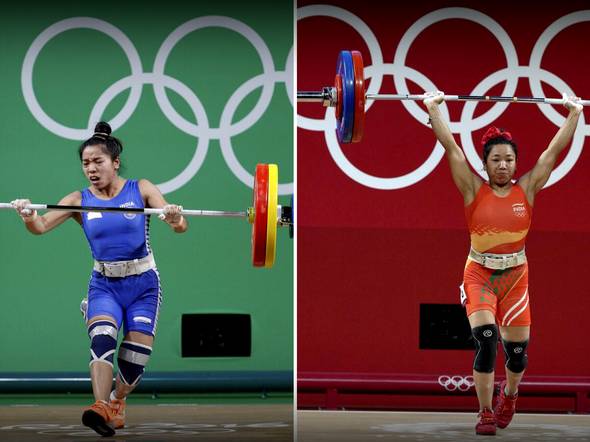 Dr. Aaron the American who gave Mirabai Chanu a new lease of life.

They demonstrate the difference between dreams being crushed and a champion in the making getting herself up five years later to realise those dreams.

Sharma discovered Dr. Aaron Horschig on Instagram, an American physical therapist, strength and conditioning coach who is making waves in the iron game.

Sharma needed to make the finding because Mirabai was frustrated by her body’s imbalances, which were preventing her from lifting easily. The player and coach were looking for a healing touch when they came upon Aaron.

Aaron, a former weightlifter, is a popular social media user. On Instagram, he is known as @squat university, and he has 1.8 million followers who consume his videos and articles about moving better and optimising performance. He has also worked with elite strength athletes, including Martins Licis, the 2019 World’s Strongest Man champion.

Mirabai and Sharma travelled to St. Louis in October 2020 after communicating with Aaron via chats and video calls, kicking up a partnership that would prepare her for Tokyo.

Aaron is overjoyed with Mirabai’s Olympic silver medal. “I am overjoyed for her, so happy for her, so proud of her.” “She did an incredible job,” he stated in a video interview.

“Her coach actually contacted me, seeking for help in coping with some of her injuries.” He was irritated that she had sustained these injuries. They were attempting to get assistance, but it was simply not working. “He knew she had such tremendous potential and that if she could only get healthy, she could accomplish some incredible lifts,” Aaron explained.

Mirabai rebounded from her Rio loss to win the world title in Anaheim, California, in 2017. The aches and pains, on the other hand, were catching up. Mirabai’s biggest issue after winning a gold medal at the Commonwealth Games in 2018 was lower back pain.
Mirabai and Sharma realised they needed a solution to her problems rather than band-aid tactics when she returned to competition in 2019, especially because competitive weightlifting is merciless and may brutally expose any weakness.
“At the time, she was battling with some lingering back issues, a prior hip injury, and, I believe, slight issues with her left and right shoulders,” Aaron explained.

He assessed Mirabai, identified the issues that were affecting her, and devised a very personalised, organised programme for her. “I recall her right hip being one of the concerns, and that it was really stiff, which caused her to develop a pretty big hip shift [she would move to a side and not come up strong and straight when lifting the barbell].” That, I believe, was the primary cause of her back problems. We only focus on this side of pain these days. You don’t take a step back and analyse the reason and link within the body.”

Aaron treats injuries like these with a movement-based approach, similar to how physical therapists learn about the body. For athletes like Mirabai, who are accustomed to lifting more than twice their bodyweight, this is equivalent to taking baby steps — working with bodyweight and executing numerous exercises across a range of motion to determine the root of difficulties. Consider urging Usain Bolt, the world’s fastest man, to learn to walk before he sprints. The learning is straightforward: if undesirable movement patterns have snuck in, concentrating on fundamentals can help you improve.

So, can India dream bigger with Mirabai for the 2024 Olympics in Paris? “Unquestionably,” Aaron said. “I’m very enthusiastic for the next three years because I believe Mirabai will be able to show the world some incredible things… what we’ve done and will continue to do will allow her to stay at this high level for a long time.” We don’t want to get ahead of ourselves because Paris is three years away. But I will say that by staying healthy and avoiding minor aches and pains, there’s no telling what the strength and power in her skill and what she’s fostered with her coach may create in the future. I have strong hopes that she will continue to do so.”

Aaron believes Mirabai’s ability to express her full strength has been hampered by injuries. “However, I feel she has the strength to get there.” I believe we will see some significant lifts in the next years. I know her coach is convinced she has it in her.”