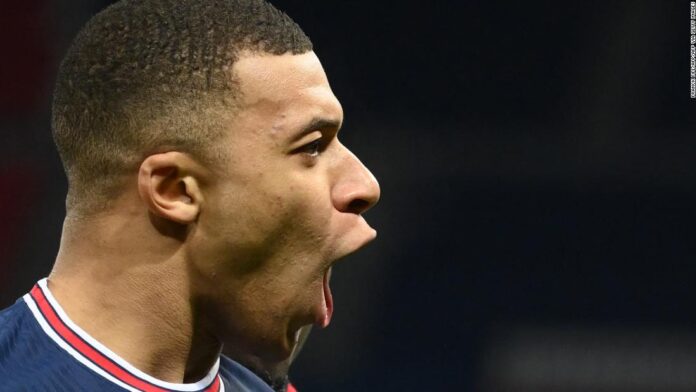 The ‘pleasure’ of playing alongside Leo Messi at PSG, according to Kylian Mbappé. The French superstar’s current contract with PSG expires on June 30, 2022, and he hasn’t ruled out a summer move to Carlo Ancelotti’s Real Madrid.

The agreement was nearly completed, and the striker even admitted at the time that he wanted to leave PSG. Despite having to stay in Paris after the club deemed Madrid’s offer insufficient, Mbappé says he doesn’t regret expressing his feelings.

When asked if he would play for Real Madrid next season, Mbappé laughed, saying that all he had on his mind was “beating Real Madrid in February and March.”

In an exciting twist of fate, Mbappé’s PSG will soon face 13-time European Cup winners Real Madrid in a star-studded Champions League round-of-16 tie after fixtures were redrawn following a technical error in the UEFA competition draw in December.
Despite spending more than $1 billion on transfers since their takeover in 2011, PSG has failed to win the world’s premier club tournament.

PSG did reach the Champions League final for the first time in 2020, but were defeated 1-0 in Lisbon by Bayern Munich. PSG were beaten 4-1 on aggregate by Manchester City in the semifinals of last season’s competition.

“We must be prepared. It’s finally time, “Mbappé stated. “It is the most crucial part of the season. Of course, we want to take the initiative now. We’ve done finals and semifinals for the past two years, but now we want to win.”

The native Parisian grew up in Bondy, a commune in the city’s outskirts, and had not even been born when France won its first World Cup in 1998.

Kylian Mbappé has been the Ligue 1 top scorer three years in a row since joining PSG from rival club Monaco in 2017, as well as winning the same number of league championships and two player of the year awards.

He was named the best young player in the 2018 World Cup as a teenager, scoring four goals, including one in the final as France won the trophy for the second time.

He has more than 50 goals and over 20 assists this season alone. On Tuesday, he capped off 2021 by being named the best men’s player at the Dubai Globe Soccer Awards.

His success at such a young age with club and country is unparalleled, and realising his dreams at his hometown team is a major reason he is staying for the time being.

Another motivator is the arrival of Lionel Messi, an Argentine footballer who joined from FC Barcelona in the summer.

Kylian Mbappé would have seen Messi at his best as a child, from 2009 to 2012, when he won four Ballon d’Or trophies and two Champions League titles.

The transfer of Messi, considered the greatest player ever, stunned the sport and created a much-vaunted forward line of Messi, Mbappé, and Brazilian legend, Neymar.

Kylian Mbappé has had to “adapt” his game and make concessions to play with Messi this season, because the diminutive playmaker prefers working in tight spaces.

Mbappé, on the other hand, is simply grateful to be able to learn from and play alongside such talented teammates.

And, if his plans to join Real Madrid fall through, where would the superstar like to play next?

Anderson, who is also a Spurs fan, asked Mbappé the same question, but the 23-year-old forward put an end to any possibility of that particular move, much to the dismay of the CNN anchor.

Meanwhile, Kylian Mbappé will continue to enjoy winter evening walks along the Seine and seeing the Eiffel Tower on his way to games.

But, if his long-term future at PSG is in doubt, an ambitious glint in his eyes shows that he wants to make the most of what could be his final six months in the French capital.