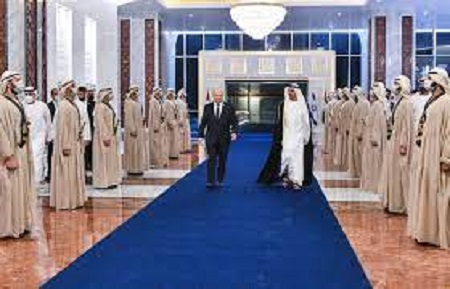 Naftali Bennett will meet Crown Prince Sheikh Mohammed bin Zayed al-Nahyan of Abu Dhabi on Monday, in the first formal visit by an Israeli leader to the UAE since diplomatic ties were established.

The meeting is scheduled during talks between Western powers and Iran to rein in Tehran’s nuclear programme. However, Naftali Bennett administration has expressed concern about the discussions’ course, and Sheikh Mohammed has attempted to resist Iranian influence in the area.

Naftali Bennett, who arrived Sunday, said he would discuss business relations and other areas of collaboration.

“This is only the beginning,” he stated in Israel.

After nearly 50 years of no diplomatic ties, the UAE and Israel began restoring relations last year. It created a diplomatic frenzy that saw additional Arab countries, including Bahrain, Sudan, and Morocco, establish formal connections with Israel.

Last year, he planned to go to Abu Dhabi, but Jordan refused to approve his flight over the nation. The UAE attempted a different approach, urging Arab countries to create links by removing obstacles to importing F-35 jet fighters. In recent weeks, the Middle East has seen a succession of astonishing diplomatic manoeuvres, as the Iran nuclear talks in Vienna have stalled.

Islamist movements in the area that pose a national security concern to the UAE. The UAE has also dispatched a senior national security adviser to Iran, and the Saudis have quietly discussed re-establishing ties with Iran. Israel has encouraged the US to be harder on Iran and has threatened to strike it with force.

He stated Sunday that he was going to the UAE at Sheikh Mohammed’s request, and that the Abraham Accords had encouraged regional cooperation, notably against Iran. Following months of secret Iranian-Israeli naval operations, Israel, the UAE, and the US started combined Red Sea exercises last month to oppose Iranian naval advances.

“We need to force Iran out of Israel, the Red Sea, and the places that threaten our freedom to sail,” a senior Israeli navy official stated. “We need to tighten our alliances to accomplish that.”

New diplomatic relations with the UAE and other Arab states have reaped mixed economic returns, with state-backed projects leading the way. Official Israeli figures from January to October showed bilateral trade at $874.5 million, a tenfold increase. The statistics does not include some of the year’s greatest wins, such as Delek Drilling’s sale of its offshore Tamar gas field to Abu Dhabi’s Mubadala wealth firm.

A daily tour of The Wall Street Journal’s finest scoops and stories.

Other unaccounted sales are technology and defence. At the Dubai Air Show in November, Israel Aerospace Industries Ltd. agreed to convert four passenger jets into freighters for Emirates Airline. Unmanned surface vehicles, commonly known as drone ships, are being developed by Israel’s state-owned aeronautics business. The vehicles may be used for environmental monitoring and underwater detection, the makers claim.

Last month, the UAE helped negotiate an agreement between Israel and Jordan to develop renewable energy and desalination plants along the Jordan River. Jordanian solar farms will generate 600 megawatts of power for export to Israel. Israeli desalination facilities will export 200 million cubic metres of water to Jordan.

Even in the midst of the May fighting in Gaza, both Israel and the UAE were anxious to promote tourism between the two nations. Hundreds of thousands of Israeli tourists have visited the UAE this year, according to government figures.

They have also become closer in business. According to media sources, the Emiratis have spent hundreds of millions of dollars in Israeli enterprises.

The insider added Emirati investors are keen on food and water technologies, as well as renewable energy. The Emiratis want Israeli enterprises to expand their operations in the UAE, utilising it as a financial and logistical hub and a gateway to Asia.

In late November, Our Crowd, Israel’s most active VC firm, opened offices in the UAE to invest directly in Emirati startups.

Building these bonds will take time. Neither this week’s nor next month’s bargain. It’s about laying a solid basis for collaborative engagement between our two nations for decades and millennia to come,” stated CEO Jon Medved.

Israel has recently sponsored activities at Dubai’s Expo 2020, including Hanukkah festivities and an interfaith event.