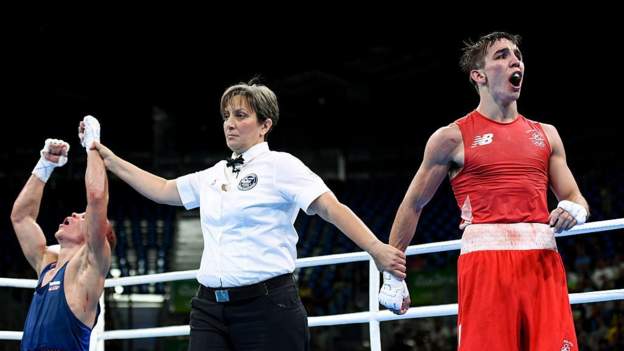 An independent inquiry discovered a mechanism in place at the Rio Olympics 2016 for officials to affect the outcome of boxing events.
The “seeds had been sown” years previously, according to Professor Richard McLaren, the leader of the inquiry commissioned by the sport’s world governing organisation AIBA.
The AIBA expressed “alarm” about the investigation’s findings.
The inquiry also revealed that the Rio Olympic 2016 qualifiers served as a “practise ground” for manipulators to “fine-tune” their approaches.


The study discovered two bouts that “publicly collapsed the system,” including the bantamweight quarter-final between Conlan and Russia’s Vladimir Nikitin.

Conlan was the reigning world and European champion at the time, and his defeat sparked widespread outrage despite the fact that he appeared to win the fight easily.
The other was the gold medal heavyweight match between Evgeny Tischenko of Russia and Vasily Levit of Kazakhstan. The findings also put into doubt Joyce’s silver medal in the men’s super heavyweight final against France’s Tony Yoka. According to the study, there were around 11 “strange” bouts in total – and “there may be others.”

“I’m overjoyed,” Conlan told BBC Sport Northern Ireland. “It’s been five years and a long time coming.” “I wasn’t expecting this. ” It’s not news to me that it’s been done and that my fight has been called up, but it’s wonderful news. It’s a huge day for boxing and Olympic sport.” Rio’s black mark will always be there, and I believe that if I hadn’t said what I said and done what I did, this would not be happening today. “I believe it is a watershed moment for amateur boxing, particularly for the people that suffered in Rio Olympics, including myself.” It’s a victory.”

Professor McLaren was appointed to investigate the Rio Olympics 2016 charges in June as part of the AIBA’s efforts to reform the sport under new president Umar Kremlev.
Professor McLaren, who researched state-sponsored doping in Russia, discovered that the AIBA manipulation structure was made possible because senior personnel determined the laws did not apply to them.
He stated that Wu Ching-kuo, the AIBA’s then-president, “bears ultimate responsibility for the inadequacies of officiating at Rio and the qualifying events,” and that Wu was supported in Rio by his executive director Karim Bouzidi.

“The executive director grabbed authority from the permanent commissions. The commissioners, like the president, would allow this to happen “McLaren stated.

“Once in power, he would supervise the appointment of referees and judges (R&Js) who knew what was going on but would comply with the manipulation, or who were incompetent but wanted to stay as an R&J and were willing to acquiesce or turn a blind eye to what was going on.”

“Boxing has a problem, and it has nothing to do with the rules and procedures. It’s a people issue. People have been working outside the rules for far too long “McLaren stated.

The AIBA modified its R&J system from judges being nominated by their respective international federations to an accredited 1-3 star system with the later addition of seven independently contracted 5-star permanent R&Js in a short period of time.
The executive director chose all of the R&Js in Rio. Corrupt members of the draw commission would sway the selection process “so that the ‘proper’ R&Js could referee the bout as directed.”

President Kremlev stated in a statement, “I am dedicated to ensure that boxers enjoy a fair fight.” This resolve is exemplified by AIBA’s unwavering commitment to uncovering and acting on the truth.

“We must now carefully analyse the report to determine what steps must be taken to secure justice.” What is critical is that we ensure that the tools are in place to demonstrate that the results are not suspect.”

More information about the probe will be released in November and then again in March 2022.

“AIBA chose Professor McLaren because we have nothing to hide,” president Kremlev explained. “We will strive to integrate any useful recommendations.” We will also seek legal guidance on what action can be taken against those discovered to have participated in any manipulation.

“Anyone who has fixed a fight should have no place in the AIBA family.”