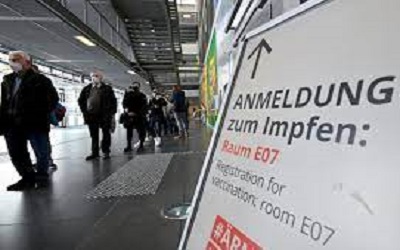 With new cases reaching an all-time high of 65,371, 16 states of Germany decided following crisis discussions with Chancellor Angela Merkel to force anyone who have not been immunised to show negative tests before using public transportation or going to work.

German authorities agreed on strong new restrictions on the unvaccinated on Thursday, including proposals to exclude them from restaurants, athletic activities, and cultural events as the country confronts a record surge of Covid infections. To safeguard the most vulnerable, they also decided to make immunisation mandatory for healthcare personnel and staff in nursing homes.

“We need to put a stop to the exponential growth” in cases and intensive care bed occupancy, Merkel said, describing the situation as “very tragic.”

Unvaccinated persons will be prohibited from entering specific public spaces in regions with a hospitalisation rate of more than three patients per 100,000 people in the previous seven days.
Except for Hamburg, Lower Saxony, Schleswig-Holstein, and Saarland, all 16 states of Germany  now have rates above three.

The so-called “2G” regulation, which allows only vaccinated and recovered people in, will apply to big events as well as leisure and sports facilities.

“With the current trends, we are heading for a very, very terrible situation, particularly for all of the individuals who work in hospitals, particularly in critical care,” Merkel added.

The outgoing chancellor urged more Germans to be vaccinated, stating flatly that “many of the steps that are currently essential would not have been necessary if we had more vaccinated individuals.”

Last month, Bayern Munich player Joshua Kimmich triggered a global debate over vaccines when he said he had chosen not to get the vaccine.
Following a big increase in the spring, Germany immunisation rate had plateaued throughout the summer, hovering at slightly about 70%. Despite rising infection rates in recent weeks, lawmakers have been accused of passivity and of focusing instead on negotiations to establish Germany next government following September elections.

The political labyrinth was on full show earlier Thursday in the lower chamber of parliament, when MPs were urged to vote on a measure providing Merkel with the legal foundation.

The three political parties negotiating the formation of Germany next government had drafted a new draught law to replace existing laws slated to expire on November 25, and had passed it in the Bundestag, where they hold a majority. However, Merkel’s conservative CDU-CSU coalition claims the revised draught is weaker than the current legislation and has vowed to oppose it in the upper chamber of parliament on Friday, potentially delaying regional leaders’ choices on Thursday.
Lothar Wieler, RKI’s chief executive officer and one of the country’s finest immunologists, has expressed dissatisfaction with the political impasse. “We don’t have to continually coming up with fresh ideas. We have all of the ideas and prescriptions we need “He stated.