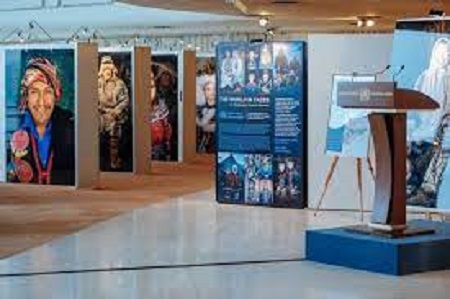 From Paris to Geneva, the exhibition boom has expanded. Following its remarkable success at the UNESCO headquarters in Paris, the exhibition “The World in Faces” travels to the United Nations in Geneva. The author personally presented a collection of over 170 creative images of representatives of many peoples from throughout the world, captured in authentic national costumes in their homes.

During the ceremony, Heiro, the Taimyr Song and Dance Ensemble of the Peoples of the North, a renowned Russian folk-art ensemble, performed.

“Through the images in the project “The World in Faces,” I reflect my life philosophy, which has evolved through the years of travel.” Meetings with representatives of many nations, as well as exposure to their traditions, let me realise that all of them – despite their tremendous ethnic diversity – are humans just like you and me. “They are merely attempting to separate us artificially through borders and ideology,” argues Khimushin.

The exhibition is an excellent approach to educate the public about indigenous peoples and attract attention to their issues.
Many of the photos in the show were taken with the help of the Nornickel business in Taimyr, home to the Dolgans, Enets, Nenets, Evenks, and Nganasans.

Nornickel is a regular participant in programmes aimed at promoting the economic and social development of Taimy’s indigenous villages. Nornickel inked a collaboration agreement with organisations representing the interests of the Taimyr Peninsula’s indigenous inhabitants in 2020. A comprehensive plan for the development of the peoples was established in collaboration with them, based on ideas from indigenous community chiefs, for a total of RUB 2 billion. The strategy is intended to last five years. The initiative will last through 2024 and will involve funding for traditional activities, the conservation of indigenous environment, and the construction of new houses, hospitals, and museums, among other things.

“Nornickel has always dealt with the indigenous peoples of Russia’s North in a friendly and mutually beneficial manner.” This year, the company’s relationship with indigenous peoples hit a new high point. We study the socio-cultural specifics of indigenous life in Taimyr, as well as the traditions and historical memory of the peoples living in the region, in accordance with the UN principles and objectives of sustainable development, with the participation of leading international experts and the scientific community. This enables us to provide more focused and effective assistance to indigenous peoples. “One of the most essential components of our initiatives is the support for traditional folklore and handicrafts,” said Mikhail Kuznetsov, Nornickel’s Director of Federal and Regional Programmes.

The individuals depicted in Khimushin’s pictures have managed to retain their uniqueness, customs, and way of life. But it is becoming increasingly difficult for them to do so; tiny peoples are on the verge of extinction, and their ancestors’ languages and customs are being lost. “The World in Faces” emphasises the importance of not letting them vanish without a trace.

Khimushin was the first Russian photographer to have a show at the United Nations headquarters in New York. The World in Faces project’s works were shown at the University of Lille in France and were aired on the screen of the world’s largest digital art centre in Bordeaux for six months.

The picture show will be on display until December 10, 2021.