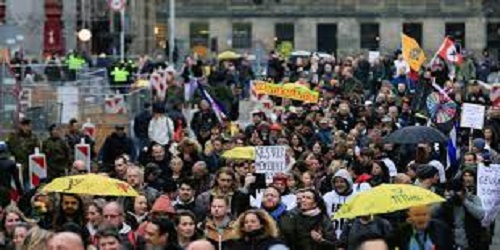 Last Saturday, the riot-stricken Netherlands went back into Western Europe’s first partial lockdown of the winter, with at least three weeks of limits, and is now proposing to prohibit unvaccinated individuals from visiting specific events.

On Saturday, a few hundred protestors outraged by the latest restrictions gathered in Amsterdam, and a similar number marched through the southern city of Breda. It came after the rioting in Rotterdam, when police said they deployed water cannons and fired warning shots.

“During the big incidents on Coolsingel (street) in Rotterdam on Friday evening and night, 51 persons were detained. About half of them were minors “Rotterdam police confirmed the incident in a tweet.

They said that the rioters arrived from all throughout the country. More suspects were still being sought by Rotterdam Netherlands police.

“When a gunshot struck two rioters, they were hurt. They are still in the hospital,” police stated, adding that the Dutch national criminal investigation agency will investigate “if the injuries were caused by police shots.”

A police officer was also brought to the hospital with leg injuries, while numerous other policemen were injured or had hearing impairment as a result of massive pyrotechnics set off by the rioters, according to authorities.

Rotterdam Netherlands Police had previously stated that they fired several warning shots, but “at one point the situation grew so threatening that police felt obligated to shoot at targets.”

Despite the day’s violence, some 300 protestors marched through the southern town of Breda near the Belgian border on Saturday, holding banners with messages such as “No Lockdown.”

Organizers claimed they were opposed to Prime Minister Mark Rutte’s proposals to restrict unvaccinated people from pubs and eateries. United We Stand Europe, a group that had planned an Amsterdam demonstration for Saturday, announced on Facebook that it had cancelled the event because “all hell broke loose in Rotterdam last night.”

According to Dutch media and photographs on social media, around hundred flag-waving demonstrators remained in downtown Dam Square, guarded by police trucks. The violence in Rotterdam was denounced by the Dutch authorities.

“The rioting and excessive brutality against police, riot police, and firemen in Rotterdam last night are horrific,” said security minister Ferd Grapperhaus on Saturday. “The police and the public prosecutor’s office are doing everything possible to apprehend, prosecute, and punish these rioters.”