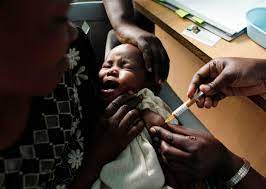 The world has a new weapon in its arsenal in the fight against malaria, one of the oldest and deadliest infectious diseases: the first vaccination demonstrated to help prevent the disease. According to one estimate, it will save the lives of tens of thousands of youngsters each year.

Malaria kills over 500,000 people per year, virtually all of whom are in Sub-Saharan Africa, including 260,000 children under the age of five. GlaxoSmithKline’s new vaccine stimulates a child’s immune system to combat Plasmodium falciparum, the deadliest of five malaria infections and the most common in Africa.

The World Health Organization approved the vaccine on Wednesday, marking the first stage in a procedure that could result in widespread distribution in developing countries. Having a malaria vaccine that is safe, reasonably effective, and ready for distribution is a historic occurrence, according to Dr. Pedro Alonso, director of the World Health Organization’s worldwide malaria programme.

Mosquirix, the malaria vaccine, is not just the first of its kind; it is also the first of its kind for any parasite disease. Parasites are far more complex than viruses or bacteria, and the search for a malaria vaccine has been ongoing for almost a century.
“From a scientific standpoint, having a first-generation vaccination against a human parasite is a significant leap,” Dr. Alonso added.

In clinical studies, the vaccine had an efficacy of about 50% against severe malaria in the first year, but by the fourth year, the value had decreased near to zero. Furthermore, the trials did not explicitly test the vaccine’s impact on fatalities, prompting some experts to question if it is a viable investment in countries with a plethora of other intractable issues.

However, severe malaria accounts for up to half of malaria deaths and is regarded as “a credible proximal indication of mortality,” according to Dr. Mary Hamel, who oversees the World Health Organization’s malaria vaccine implementation programme. “I believe we will see that effect.”

A modelling research published last year indicated that if the vaccine were distributed to malaria-endemic nations, it might save 5.4 million infections and 23,000 deaths in children under the age of five per year.
A recent vaccine in combination with preventive medications given to children during high-transmission seasons indicated that the dual approach was far more efficient than either option alone in preventing severe disease, hospitalisation, and death.
The malaria parasite is a particularly nefarious foe because it can infect the same person repeatedly. Children in Sub-Saharan Africa, where most people sleep under insecticide-treated bed nets, suffer six malaria episodes each year on average.

Even if the sickness does not kill them, the constant attack on their bodies can permanently change their immune systems, leaving them weak and vulnerable to other diseases.
Vaccine candidates that never made it past clinical trials litter the landscape of malaria research. Bed nets, the most widely used preventive strategy, reduced malaria fatalities in children under the age of five by only approximately 20%.
Against this backdrop, some scientists believe the new vaccine, despite its modest efficacy, is the best new advance in the fight against the illness in decades.

“Progress against malaria has really halted over the last five or six years, particularly in some of the world’s hardest impacted nations,” said Ashley Birkett, who heads malaria programmes at PATH, a global health NGO.

Mosquirix is administered in three doses between the ages of 5 and 17 months, with a fourth dose administered approximately 18 months later. Following clinical trials, the vaccine was tested in three countries: Kenya, Malawi, and Ghana, where it was implemented as part of routine immunisation programmes.

In those countries, almost 2.3 million doses were provided, reaching over 800,000 youngsters. According to Dr. Hamel, this increased the number of children who were protected against malaria in some way from less than 70% to more than 90%.
“The ability to minimise inequities in malaria prevention access is critical,” Dr. Hamel stated. “It was impressive to see that this has the potential to reach youngsters who are now unprotected.”
It took years to develop a reliable method for delivering insecticide-treated bed nets to families. Dr. Hamel remarked that putting Mosquirix among normal vaccines makes it surprisingly straightforward to distribute.

This week, a working group of independent experts in malaria, child health epidemiology, and statistics, as well as the World Health Organization’s vaccine advisory group, met to review data from the pilot programmes and make a formal recommendation to Dr. Tedros Adhanom Ghebreyesus, W.H.O. director-general.
“We still have a long road ahead of us, but this is a big step,” Dr. Tedros stated during a news conference on Wednesday.
Gavi, the global vaccination alliance, will then assess whether the vaccine is a worthy investment. If the organization’s board of directors authorises the vaccination — which is unlikely given the vaccine’s modest efficacy and the numerous competing priorities.

However, as with Covid-19, issues with vaccine production and supply could significantly slow progress. In addition, the epidemic has syphoned money and attention away from other diseases, according to Deepali Patel, who runs Gavi’s malaria vaccination initiatives.

“In terms of where capacity is currently in countries, Covid is a big uncertainty in the room, and rolling out Covid-19 vaccines is a massive undertaking,” Ms. Patel said. “We’ll have to wait and see how the pandemic evolves next year to determine whether countries are ready to pick up all of these other issues.”