Home World News An attack on Taiwan, China will be able to launch in 2025,...
Facebook
Twitter
Telegram
WhatsApp 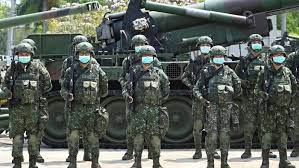 An attack on Taiwan, China will be able to launch in 2025, the island’s defense minister worn. Taiwan military is facing its most serious challenge from China in decades, according to the island’s defence minister, reflecting a rise in tensions following a flurry of Chinese military operations in the region that provoked worry from the US.

By 2025, China’s People’s Liberation Army would be able to conduct a full-fledged attack on Taiwan with minimum casualties, according to the defence minister. Kuo-cheng, Chiu

“The current condition for our military is truly the grimmest in the more than 40 years since I joined the service,” Mr. Chiu said in a speech to Taiwan’s legislature on Wednesday, answering MPs’ questions about a proposed $8.7 billion special defence budget package.

Mr. Chiu’s remarks come after China’s military flew almost 150 fighters, bombers, and other aircraft near the self-ruled island in four days, an escalation that prompted Taiwanese President Tsai Ing-wen to issue a statement on Wednesday.
“Here, I want to warn Beijing authorities that they must exercise a certain amount of restraint to avoid inadvertently sparking conflict,” she said in videotaped remarks delivered to senior leaders of her Democratic Progressive Party, echoing Mr. Chiu’s warning that even a minor miscalculation risked sparking a crisis. The Taiwan Affairs Office in China did not reply quickly to a request for comment. China is currently on vacation for a week.

Deng Xijun, China’s ambassador to the Association of Southeast Asian Nations, tweeted late Wednesday that the PLA “issued a strong message to Taiwan secessionists and their foreign allies” by dispatching 149 aeroplanes near Taiwan.
“China would take all necessary means to destroy any ‘Taiwan independence aspirations, which are guaranteed to fail,” he warned.
Chinese aircraft began flying sorties on Friday, about the same time as an armada of 17 ships, including two US carrier strike groups, converged to perform joint manoeuvres southwest of Okinawa, Japan, not far from Taiwan. The first sorties also took place on China’s national day.

The Biden administration has responded to the sorties by stating its unwavering support to Taiwan and urging Beijing to halt the flights. According to a senior administration official, White House National Security Adviser Jake Sullivan raised grave worry about the flights to a top Chinese official on Wednesday. He “made pretty plain our worries about Beijing’s recent, provocative acts, as well as our concerns about the continuous pressure and coercion that we see from Beijing,” the person said, declining to describe the Chinese response.

“It was a really open and direct chat,” stated the official. The flights, according to the official, are part of a “very worrying trend.”

The uptick in military activity has increased focus on Chinese President Xi Jinping’s intentions toward Taiwan, which the Communist Party considers to be a part of China. Beijing has threatened to take control of the island militarily if necessary. While Mr. Xi has made Taiwan’s reunification a vital component of his plans for China’s national rejuvenation, military analysts dispute on when, if ever, the PLA, which hasn’t fought a war since 1979, will feel confident enough to launch an invasion.

On Wednesday, Mr. Chiu entered the fray with his remarks. “It is capable now,” the defence minister added, “but it must evaluate how much it would cost and what type of outcome it would achieve.” He went on to say that by 2025, “it would have reduced the cost and losses to a bare minimum.” Mr. Chiu did not go into further detail, but military observers have noted the significant experience PLA aircraft have gained by flying sorties within Taiwan’s air-defense identification zone. Around the last year, there have been over 800.