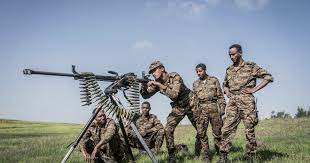 Ethiopian ground troops, backed by regional militia from the Amhara region, launched synchronised attacks along Tigray’s southern border on Tuesday, according to government and rebel officials.

Government troops used heavy artillery and tanks, backed up by drones and aircraft, to target important supply routes and at least three towns near Tigray’s border with Amhara: Wegeltena, Geregera, and Haro.

The operation, which effectively terminates a frayed cease-fire imposed by Ethiopia’s in June shortly after government troops withdrew from Tigray’s regional capital Mekelle, is centred on the key road that serves as the only viable entry route into Tigray.

According to Billene Seyoum, an Ethiopian prime minister’s spokesman, government troops are fighting to safeguard all residents from TPLF “terrorism.”

According to a spokesman for the Tigray People’s Liberation Front (TPLF), which marched into Amhara in July in pursuit of regional militia that aided government forces, rebel fighters are firmly “defending the aggression.”

a longtime US counterterrorism partner in the Horn of Africa who won the 2019 Nobel Peace Prize for mediating a cease-fire to end a three-decade conflict with neighbouring Eritrea has become a worldwide pariah when his 2020 invasion of Tigray province devolved into a gruelling civil war The United States has called for a stop to the fighting and sanctioned government officials, prompting Mr. Ahmed to increase military cooperation with China, Iran, and Turkey.
Analysts say Mr. Ahmed is expecting that his landslide re-election this summer would give him leverage in the offensive, but that it will likely simply prolong the conflict and deepen a raging human crisis across northern Africa.

“He is essentially replicating his previous method of tremendous force,” said Alex de Waal, executive director of the World Peace Foundation, located at Tufts University’s Fletcher School of Law and Diplomacy. “I fear very high levels of violence and a war that will go on indefinitely with no sign of a resolution.”

Residents in northern Amhara said on Tuesday that a large number of military helicopters have been flying over the area toward Tigray in recent days.

According to residents, majority of Tigray’s population and relief workers remained inside the mountainous region’s makeshift refugee settlements.