Home Life Style Despite COP26 commitments, the world is on course for 2.4 degrees of...
Facebook
Twitter
Telegram
WhatsApp 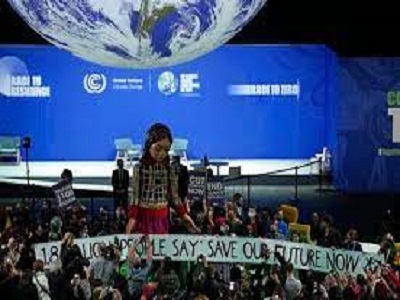 Despite COP26 agreements, the globe is on track to warm by 2.4 degrees Celsius. The net-zero objectives of 40 nations account for 85 percent of worldwide emissions reductions, but just 6 percent of those emissions are supported by specific strategies, according to the organisation.

“It’s fine for leaders to claim they have a net zero target, but if they have no plans to get there, and their 2030 targets are as low as so many of them are, then frankly, these net zero targets are just lip service to real climate action,” said Bill Hare, CEO of Climate Analytics, in a statement. “Glasgow has a significant credibility deficit.”

Delegates from all across the globe are coming at COP26 to try to mitigate the effects of the climate catastrophe. While there were several breakthroughs in the first week of negotiations, experts warned the deals may not meet the urgency of the moment — specifically, that they won’t bring the world closer to limiting warming to 1.5 degrees.

“There are a lot of broad declarations that don’t have the facts underneath: exactly when, how much, and who’s going to do what,” said Helen Mountford, World Resources Institute vice president for climate and economics.

Last week, more than 130 countries representing more than 85 percent of the world’s forests vowed to cease and reverse deforestation and land degradation by 2030, in what was hailed as the first significant agreement of the COP26 meeting. When trees are destroyed, they can release carbon dioxide into the atmosphere. Some of the world’s greatest carbon stores, which are locked away in tropical forests, were included in the deal.

Another significant step forward has been the signing of an agreement by more than 25 nations to stop financing fossil fuel projects in other countries. However, some argue that it does not go far enough and should include funding for domestic fossil fuel programmes as well as overseas ventures.

Under present policies – not plans, but what countries are already doing – CAT predicts that global temperatures would rise by 2.7 degrees Celsius.

CAT estimated that if all net-zero promises are completely implemented, the most optimistic scenario would be 1.8 degrees of warming, which would need strong and swift action by 2030. Despite this, the research concludes that countries’ climate objectives for 2030 are insufficient.