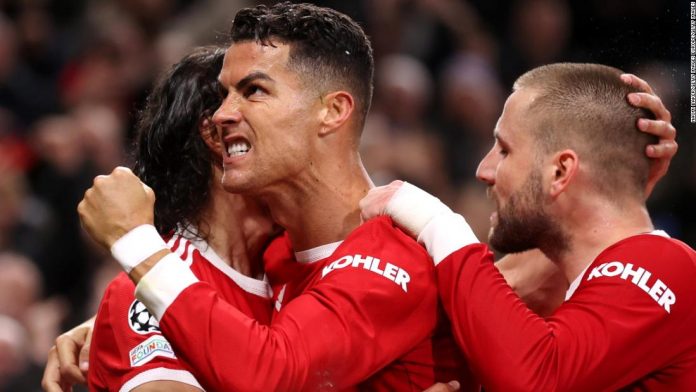 Cristiano Ronaldo amazing comeback against Atalanta. United got off to the worst possible start, with goals from Mario Pasalic and Merih Demiral giving the visiting Italians a 2-0 lead inside the first half hour. However, United came out of the half-time break looking like a completely different team, as Marcus Rashford’s early goal halved the score and had the home fans ecstatic.

Captain Harry Maguire then equalised for United with a superb goal 15 minutes from time, before a typical Cristiano Ronaldo jump and header with only eight minutes remaining secured a 3-2 triumph and capped another spectacular Champions League night at Old Trafford.

It was critical for United to set the tone early on in order to get the support of the crowd on a night that would be laden with tension and perhaps essential to Ole Gunnar Solskjr’s stay as manager. However, that never seemed realistic from the start, as Atalanta jumped out to an early lead and scored within 15 minutes.

It just needed a simple, hopeful pass into United’s half to split the home defence, as Atalanta worked the ball wonderfully to find Davide Zappacosta, whose low cross was put into the net from close range by Pasalic. Atalanta’s second goal was much worse, at least from the perspective of Manchester United. Teun Koopmeiners’ corner, which was headed home by the absolutely unmarked Demiral, was all it needed to break down the United defence this time.

Atalanta’s two first-half goals only served to emphasise United’s recent defensive struggles, which have seen Solskjr’s side keep just one clean sheet in their previous 20 outings. After being found in the box by a superb first-time ball from Fernandes, Fred had a great chance to cut the deficit in half, but he could only bend his effort wide of the post. Cristiano Ronaldo, who had been a mere spectator thus far, held his arms raised in frustration, as if expecting a pass.

Rashford was then passed clear through on goal moments later, but his shot clipped the top of the crossbar in the final effort of an exciting first half.
Rashford finally got his goal, sprinting onto Fernandes’ through ball and putting the ball superbly into the far corner, and United looked like an entirely different team.
That goal transformed the game’s momentum, and it seemed like it was only a matter of time before United found an equaliser, but goalkeeper David De Gea still had to make two crucial saves to prevent Atalanta from regaining its two-goal advantage.                Fortunately for United, it has a guy this season who has scored significantly more Champions League goals than that – 136 more to be exact.
Cristiano Ronaldo career has been characterised by huge goals in big occasions, and the Portuguese forward now has another to add to the list, as he headed home from Luke Shaw’s wonderful cross to notch his 137th goal in this competition and send Old Trafford into a frenzy.
Few inside Manchester United’s stadium will have been happier with that goal than Solskjr, who has been forced to brush aside an increasing number of doubts about his job security following a spate of poor performances.

The win will relieve some of the strain – for a while, at least – but the Norwegian coach understands his team still has a lot of work to do after that first-half performance.
Despite being rock bottom at halftime, United now leads Group F, and its fans will be hoping the second half performance is a portent of things to come.