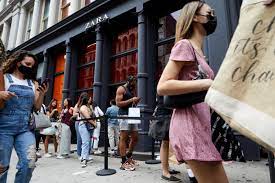 Consumers are showing restraint as confidence declines. Greg Petro, CEO of First Insight Inc., told WWD that data is pointing to future “spending restraint,” and that it follows a trend he hasn’t seen since just before the Great Recession.

Women shoppers were aware of changing market conditions at the time, according to Petro, and had expressed reservations about future spending just before the bubble broke. Now, during supply chain interruptions, he’s seeing the same patterns emerge once more.

“What concerns me is that when you look at the statistics and numbers of COVID-19 outbreaks across the United States, as well as the death mortality rate, the number of vaccinated people, and those who have gotten COVID-19, it all seems to be trending in the right direction [when compared to early pandemic numbers].” So, what’s the big deal? Why are people worried about shopping and getting out to do things?” Petro expressed his thoughts.

Female shoppers, according to Petro, are more connected to their social networks. And it’s best to listen when they’re restrained, he says.

Concerns about the Delta variant, as well as, to a lesser extent, rising gas and food costs, have resulted in a less positive view of present economic conditions and short-term growth expectations, according to Lynn Franco, senior director of economic indicators at The Conference Board. Consumer spending plans for homes, automobiles, and major appliances all dipped somewhat, while the percentage of people planning a vacation in the next six months increased.”

Surprisingly, First Insight data done on August 5 and released on August 10 forecasted the dip in consumer confidence reported by the Conference Board. According to statistics from First Insight, the Delta variant hurts customer sentiment. The amount of customers responding to First Insight that they are “very or somewhat concerned” about COVID-19 increased by 25%, the biggest one-month increase since March 2020. Retailers and brands should be prepared for a decline, according to Petro, based on current consumer attitudes and historical patterns.

Petro also provided his perspective on the present economic scenario to add to the current situation’s context. According to him, the stimulus package pushed a lot of money into the market in response to the pandemic. While it was necessary, it gave the economy an artificial boost that, when combined with the epidemic itself, threw supply-and-demand curves out of whack. “Demand variability” and inflationary price trends, according to Petro, are also placing pressure on the market.

Petro believes the drop in confidence is due to customers anticipating a day when they would have to pay the piper in the form of greater taxes for the stimulus measures. Meanwhile, Petro encourages brands and retailers to carefully listen to their customers and alter their merchandising and pricing strategies as needed.