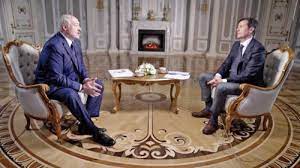 Belarusian strongman Alexander Lukashenko tries to turn the tables in a combative interview. When confronted with allegations of human rights violations such as attacks on protesters, a bomb threat that forced a plane to land, allowing Belarusian authorities to detain dissidents on board, and what the European Union refers to as the “weaponization” of migrants, Lukashenko attempted to deflect any negative attention.

“This is nonsense,” he remarked, referring to assertions by the Polish administration that Belarus was dumping people on their border.
The strain between Belarus and the EU, on the other hand, is palpable.
The fact that most airlines no longer fly over Belarusian territory is also significant. That move was prompted by the detention of an outspoken critic of Lukashenko’s dictatorship on a Ryanair flight from Athens, Greece, to Vilnius, Lithuania, in May.

Local air traffic controllers urged the passenger plane to make an emergency landing in Minsk because they suspected there was a bomb on board, so a Belarusian fighter jet stopped it in Belarusian territory. Before allowing the plane to take off, Belarusian police arrested exiled dissident writer Roman Protasevich and his Russian girlfriend on the ground.

According to a Belarusian official, Hamas, a Palestinian militant group, sent an email claiming there was a bomb on board the aeroplane. The accusation was dismissed as “false news” by a Hamas spokeswoman. The proposal to land the plane in Minsk, according to Protasevich’s allies, was a fantastical deception.

When asked by CNN whether the bomb threat was genuine or fabricated as an excuse to detain a critic, Lukashenko just stated that his country respected international regulations.
“If you are frightened to fly over our territory, I can personally guarantee your and your company’s safety, as well as the safety of your country or any other country, when flying over Belarus,” Lukashenko told CNN.
“It’s fine if you don’t want to fly. Okay, go ahead and fly over the North Pole or the South Pole; it’s your choice; I can’t stop you. I don’t have the same power as the United Kingdom, let alone the United States, to impose any terms. As you just stated, if you don’t fly, others will. That’s okay; we’ll make do.”

Belarus has been led by Lukashenko, a volatile former collective farm boss, since 1994, when he became the country’s first and only leader since the Soviet Union collapsed.
His iron grip over his country has been increasingly powerful since last year’s vote, earning him the moniker “Europe’s last dictator.”
His public appearances are carefully orchestrated, and he is frequently accompanied by adoring countrymen.
He danced and ducked his way through the CNN interview at the Palace of Independence, aiming to shift the focus away from the West. When confronted with specifics of some of the victims of those against him’s severe, even murderous treatment, he declared he had nothing to apologise for.

“I don’t believe this is a relevant point, and I have nothing to apologise for in principle,” he replied.

CNN quoted Human Rights Watch and Amnesty International reports that some inmates suffered broken bones and burns, while others claimed they were forced to lie naked in the dirt while being assaulted.

Lukashenko’s response was as follows: “We don’t have a single detention centre like Guantanamo Bay or the facilities that the US and your government built in Eastern Europe, as you say… Our own detention camps, where persons accused or under investigation are held, are no worse than those in the United Kingdom or the United States. I can assure you of that.”

He erroneously claimed that CNN and others “kept quiet about” the killing of Ashli Babbitt, who was shot and died as she attempted to crawl through a broken glass leading to the Speaker’s Lobby during the January 6 insurgency at the US Capitol.

He was first hesitant to even use the name of opposition leader Svetlana Tikhanovskaya, who fled Belarus after a generally regarded rigged election.

He went on to say that Tikhanovskaya did not have to flee. He responded, “I swear by my children, Tikhanovskaya was not fleeing anywhere.”

Europe and the United States believe Tikhanovskaya’s election was rigged in her favour. In July, she met with President Joe Biden at the White House, who tweeted that he was “proud” to meet her and that the US “stands with the people of Belarus in their pursuit for democracy and universal human rights.”
Lukashenko portrays a beautiful picture of life in Belarus, adding that families may go out without fear of being arrested. However, the individuals we met on the streets of Minsk appeared to be terrified of something. Most people did not take the time to speak with CNN and rushed away.
One of the few young people who spoke up gave a candid assessment of why people were afraid. He explained, “This is Belarus.” “Both you and I are subject to arrest by the police.”
Lukashenko stated his countrymen understood him when he returned to Independence Palace. That he was joking when he stated a shot of vodka and a sauna could protect you from the coronavirus.
He portrays himself as a man of the people, a strong leader, and a world-class maverick. But he still keeps a close eye on what he says.
“In front of you, I’m not going to admit to anything. I’m not being investigated. So, please be careful with your statements “he stated In a single response.
He alternated between claiming he was not a “weakling” who would seek vengeance on the EU for sanctions and threatening retaliation if relations with the West deteriorated further.

But it is Lukashenko’s vulnerability, according to his detractors, that is bringing him closer to another strongman next door, Russian President Vladimir Putin, who has donated hundreds of millions of dollars in financial aid — presumably with strings attached.
Closer economic, political, and military integration has fostered conjecture that Lukashenko may be both the last and first President of Belarus, thereby merging his country with Russia.
He denies it in one breath.
“Putin and I are both capable of forming a union of two independent states that would be more powerful together than apart. Sovereignty is not a commodity that can be bought and sold “he stated

In the next breath, he speculates on what may happen if provocation occurs.

“If necessary, Belarus will combine its military bases with Russia’s in order to oppose your aggression, if you choose to do so, or if any one country chooses to attack. And, just so you know, I’ve never kept it a secret from you.”

Katharina Krebs of CNN contributed to this report.