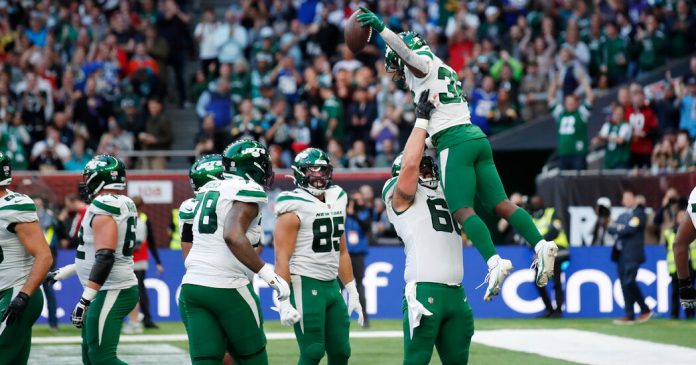 Are the Jets and Giants Still Watchable? The Giants are weighing whether to build around their two offensive talents, Daniel Jones and Saquon Barkley.
Barkley’s ankle injury does not appear to be season-ending, but rather October-ending, with possibly some November missed as well. Meanwhile, Jones was hauled off after a helmet-to-helmet hit he initiated on a third-and-goal run that sent him skidding back to the huddle.
As a result, Joe Buck, the Fox play-by-play announcer, began the second half with eight of the most depressing words in football: “Now we’ll see what Mike Glennon can do.” We certainly did.

I’m a Jets fan, and I can tell you that it’s depressing. But the Giants have had my attention this season, and remember, trash fires can be difficult to ignore. Before getting flattened at the goal line, Jones had led the Giants downfield on a march of dimes, appearing not just promising but officially good — dual-threat dangerous, ready to go chunk play for chunk play with Dak Prescott if that was what it needed to fall just short of a win.

By the time Barkley’s ankle had ballooned to the size of a tuber, Giants supporters were once again cautiously optimistic: What if Jones can carry this offence on his own? What if Danny Dimes is the genuine article? Then ex-Cowboys head coach Jason Garrett, now Jones’ offensive coordinator, ruined him by ordering a quarterback keeper on third-and-goal from the 1-yard line as everyone in Texas expected, and the Giants’ funnible future is on hold for the time being.

The Giants not only lost to their NFC East rival Cowboys, dropping to 1-4, but they also suffered injuries to quarterback Daniel Jones, running back Saquon Barkley, and big-ticket wide receiver Kenny Golladay during the game.

That’s an enormous personnel loss for a squad that was already struggling to put together entire games — no offence to backup quarterback Mike Glennon or running back Devontae Booker, who scored a receiving touchdown and carried for another.