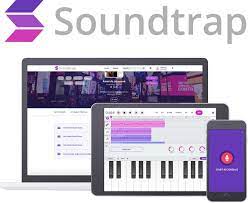 First-of-its-kind, simple-to-use, multi-platform, secure, and low-cost tool designed for the education market. A Special Version of the Online Music Recording Studio Is Now Available for Children.

BETT, London, January 19, 2016 — After a successful beta launch and six months in the market, the first-of-its-kind Soundtrap online collaborative music and audio recording studio is taking a huge step forward in the school market with the introduction of “Soundtrap for Education” today. Soundtrap has already garnered accolades from UK schools and teachers, but the new Soundtrap for Education is much better, tailor-made for children in primary and secondary schools throughout the world and delivering excellent new features for both students and teachers.

Soundtrap for Education is the first solution for children that allows them to create music or audio recordings with classmates in their invited and secured group, then share the music with classmates in the cloud from a variety of devices and operating systems. In contrast to the high learning curve and complexity inherent in other music recording tools, this new version is exactly as simple to use as the original Soundtrap solution.
Soundtrap for Education allows students to get started in less than three minutes. Students may quickly make professional-sounding music and podcasts on their own or with other students from different locations, all while using different devices.

The new education-focused version of Soundtrap assures that participants collaborate in a safe, private “walled garden” environment that is isolated from the rest of the Internet. Teachers can form such safe groups for a single class, an entire school, or numerous classes or schools, allowing pupils to participate in cross-cultural initiatives. Teachers can invite a full class to a Soundtrap group at once while yet supervising the work of individual pupils.

Soundtrap was the first online collaborative music recording studio to run on iOS, Android, Chromebook, Mac, and Windows devices, and the updated version provides significant benefits to students and teachers. Students, for example, can switch between devices at school and at home to complete assignments on their projects. Teachers may remotely coach students using the built-in video chat, and students can work on group projects with students at the next desk or around the world. Students can also use Soundtrap’s video chat to take instrument lessons or participate in group rehearsals for a school choir or band. Soundtrap is a Google for Education partner and is completely integrated with Google Classroom.

Since its inception, Soundtrap has created a lot of buzz. It is now used in over 1,000 schools, and in a year, the solution grew from 20,000 to more than a quarter-million users in 200 countries. “Our new education version is great for classrooms,” stated Per Emanuelsson, CEO of Soundtrap. “It blends usability with the ability to make learning more enjoyable. Because students can use Soundtrap everywhere they can take their devices, it creates a classroom without borders. Teachers have told us that their pupils not only enjoy it but that they have created high-quality compositions and podcasts that astonish all audiences.”

Soundtrap will demonstrate the new solution at booth #H416 at the BETT education conference in London, January 20-23. Soundtrap for Education is now available, with schools receiving a discount of less than £4 per seat per year.

Soundtrap is the first online music recording studio that works across all operating systems, including Mac, iOS, Android, Windows, and Chromebook, allowing you to collaborate with musicians from all over the world in an easy-to-use browser-based, cloud-based system. The company is headquartered in Stockholm, Sweden, the birthplace of several successful music technology startups such as Spotify, Soundcloud, and Tidal, and it also has a presence in Silicon Valley. Soundtrap is used in the elementary, secondary, and higher education industries and provides an easy-to-use platform for all levels of musical interest and aptitude. For more information, visit www.soundtrap.com.