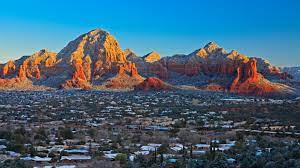 Arizona has everything, whether you’re seeking magnificent scenery, historical instruction, or just some darn tasty tacos. Here are four of the nicest cities in the state that travelers should visit:

Phoenix
The city of Phoenix has to be one of the first stops for everyone visiting Arizona. It is not only the state capital but also the most populous city in the state and the fifth-largest in the United States. It’s no wonder that Phoenix offers plenty of fascinating things to see, do, and eat because it attracts so many people from such a wide and dynamic range of backgrounds.

Yuma
Yuma, because of its closeness to the US-Mexico border, has an abundance of great Mexican food. Yuma has been a famous tourist destination for hundreds of years, because of its location at the confluence of the Colorado and Gila Rivers.

You’d never guess that this breathtakingly lovely tiny city was formerly known as “the hellhole of the west” by looking at it today. If history buffs visit the Territorial Prison Museum, which houses innumerable awe-inspiring items from Arizona’s rough outlaw past, they can get a taste of why that is. Clint Eastwood, eat your heart out.

Flagstaff
The Grand Canyon is, without a doubt, Arizona’s most well-known tourist attraction. Every year, about five million people visit to witness one of the world’s seven natural wonders. But, after that, what do they do? The wise, on the other hand, go to Flagstaff, a nearby city.

Flagstaff is more than simply “that one city that’s pretty near to the Grand Canyon.” It’s a destination in and of itself. Flagstaff, once a major railroad center, is now home to some of the state’s most spectacular old structures. It also features plenty of hiking, mountain biking, and even skiing activities in the winter.

Tuscon
Tucson is Arizona’s second-largest city, after the aforementioned Phoenix. However, that is far from its only claim to fame. This vibrant college town is recognized for its energetic nightlife and unique small-business shopping attractions, thanks to the presence of the highly regarded University of Arizona.

Of course, simply traversing the streets of Tuscon is an education in and of itself, since the city has spared no cost in conserving ancient neighborhoods, some of which date back to the 1840. While walking throughout the city, one could really trace the history of America by looking at the various house styles. You may perhaps pay a visit to one of the many museums in the area. That also works.