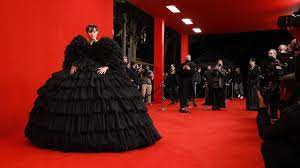 We’re All on the Red Carpet Now

PARIS — On Saturday night, the marquee outside the Théâtre du Châtelet, the gilded 19th-century musical theatre on the Right Bank, projected a red glow over the admirers thronging rows deep in the square outside. As numerous black cars drew up to unload their passengers, a forest of iPhones was raised aloft, waving in the night air like a swarm of alien palm leaves. Men and women swaggered their way over the red carpet, posing, waving, preening, and otherwise camped it up on their way inside, while photographers hovered behind a velvet rope.

Offset appeared, his enormous leather jacket dropping off his shoulders, big black jeans, and a plaid shirt/skirt wrapped around his waist!

It could have been any big film premiere (say, the next James Bond or “The French Dispatch”), except that once inside, visitors found a gigantic screen on the ornate proscenium projecting a live stream of – the red carpet entries.

People laughed as Anna Wintour, dressed in a blue floral gown, was seen on tape. They applauded as Lewis Hamilton, dressed entirely in black, came. They began to whistle when a woman arrived in a hoop-skirted black cupcake of a ball gown — until the words “Look 01” appeared in a corner of the screen.

As a knife-sharp belly laugh of an experiment on the metaphysics of the old red carpet and the new one of our digital lives, where posing has become the norm, voyeurism is a constant, the screen is the filter, and it’s harder and harder to tell what is real and what is created for the endorphin hit of clicks, the Balenciaga spring show began.

Some of the visitors were obscure industry figures: editors, retailers, and friends of the house. Other visitors included celebrities (such as Cardi B) and celebrity models (Natalia Vodianova). Some models were unknown: the street-cast friends and employees of various ages and forms of angular, uncompromising beauty preferred by Demna Gvasalia, Balenciaga’s creative director. Isabelle Huppert and Elliot Page were two other well-known models. The photographer, Juergen Teller, posed on the red carpet while photographing the photographers.

Because everyone in the room was both an actor and an observer, it was nearly impossible to discern who was an official part of the performance and who was an unsuspecting part of the production.

The outfits didn’t give anything away because so many people were dressed in Balenciaga from various seasons (as per usual at shows, where some editors have been known to change in cars between collections). And since part of Mr. Gvasalia’s success at the label has been the creation of an instantly recognisable signature: one that adds couture silhouettes to puffers and sweats, frays the edges and upsizes the shoulders, and treats entrance gowns with the carelessness of the ordinary.

Following their entrances, the models dispersed among those seated in the orchestra and balcony to watch the surprise premiere of “The Simpsons/Balenciaga,” a short prepared for the occasion in which Demna invites everyone of Springfield to Paris to participate in his show. Anna, Kim, and Kanye all made appearances (cartoon Anna said she loved it). The runway was walked by Marge, Homer, Bart, and Lisa. The real live audience then stood up and streamed into the bar for a cocktail party, with the models remaining dressed in their collection finery to be seen up close.

There was a glittering cloak and a strapless gown with sculpted 1950s hips on a starry starry night. A airy silver dress constructed of astronaut blankets, resembling a Baked Alaska. Upcycled ripped, loose denim and long, slouchy knits There was a lot of black, with a few silver accents and two fan-pleated dresses, one in brilliant blue and one in two-tone pink and red. Several sparkling catsuits and Lurch suits. Layers and leather (plant-based, according to the press statement). A new Croc – Hard Crocs! — with metal reinforcements.

Mr. Gvasalia has consistently raised the bar for concerts, particularly during the pandemic, by foregoing a straight livestream in favour of a VR experience, followed by a video game. Kunihiko Morinaga of Anrealge, who collaborated with filmmaker Mamoru Hosoda to create a psychedelic short that mixed animation with prismatic garments in a captivating debate between imagination and reality, was the only one who could match him digitally this season.

Mr. Gvasalia, on the other hand, converted the whole existential debate about the return of in-person gatherings (good or bad?) into a discourse on the exercise itself, blowing it wide open and leaving it pointless. And he made everyone in the room complicit in his criticism, or at the absolute least made it impossible for them not to roll their eyes in winking acknowledgement of their own, already present, culpability.