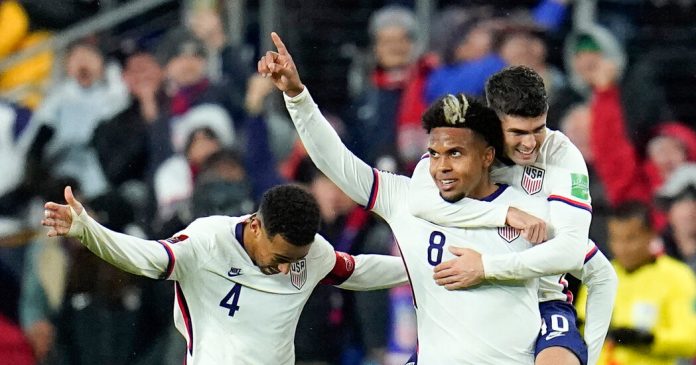 Welcome to the passionately intense, hilariously petty, and endlessly entertaining rivalry between the United States soccer team and the Mexico soccer team.

Michael Jackson’s 1988 song “Man in the Mirror,” a classic but hardly everyone’s notion of a boisterous sports arena anthem, was blasting over the stadium speakers late Friday night as the United States men’s soccer team rolledicked and embraced gleefully on the field.

Christian Pulisic had sprinted toward the sideline less than 30 minutes earlier to celebrate the first of the Americans’ goals in their 2-0 victory over Mexico, raising the front of his No. 10 jersey to show the identical words, “Man in the Mirror,” scribbled in permanent marker on his white undershirt.

Even generally well-informed American soccer fans would have been left scratching their heads at the references at the time, unsure of what was going on.

The bickering neighbours’ World Cup qualifying encounter on Friday night featured all the elements of a classic: two dazzling goals, two violent altercations, one red card, and many instances of borderline inexplicable taunting wrapped inside layers of allusion.

“We despise Mexico’s men’s soccer team,” US Coach Gregg Berhalter said afterward, “and we’re passionate competitors who want to win every time we go onto the field.”

To understand the Michael Jackson song, the homemade shirt, and the Americans’ overall self-satisfaction after the game, one must go back to Tuesday, when Mexico’s goalkeeper, Guillermo Ochoa, suggested in an interview that the Americans looked in the mirror and hoped to see Mexico, implying that the Americans wanted to mould themselves as a team in the image of their rivals.

The insults hardly registered on the Richter scale of sports trash talk. However, the youthful American squad, which has had mixed success in forging an identity through the first half of the 14-game qualifying competition for the 2022 World Cup, was content to run with them anyhow, using them as added fuel.

Berhalter’s first unprompted remark came the day before the game, during his press conference. He remarked that the Americans’ two victories against Mexico earlier this year had not been sufficient to earn Mexico’s respect. He stated that his squad will have to accomplish more on Friday. (On Friday night, American supporters booed Ochoa every time he touched the ball.)

Then followed the reaction of the players on the field. The teams fought through a tense first half, with goalkeeper Zack Steffen making two athletic stops to keep the Americans in the game. Then, in the second, everything — the teams’ attacks, the players’ emotions — erupted.

Mexico defender Luis Rodriguez menacingly grabbed wing Brendan Aaronson’s face from behind in the game’s second on-field scuffle, resulting in a protracted, unpleasant sequence of yelling among players from both sides. Pulisic was set to join the field as a replacement as the teams pushed and shoved and three yellow cards were given. The harsh gave way to the magnificent as he did.

Forward Timothy Weah received the ball on the right flank in the 74th minute and calculated a sequence of dribbles down the perimeter of the penalty box, measuring out a pocket of space. After producing it, he thwacked an inch-perfect cross into the goalmouth, where Pulisic swooped in to head it past Ochoa to give the US a 1-0 lead.

It was Pulisic’s first touch of the ball in a competitive encounter for the United States since suffering a high ankle sprain during a qualifier in Honduras in September. Pulisic paused to show off his “Man in the Mirror” jersey before being swarmed by his team mates in front of a sellout crowd of 26,000 people.