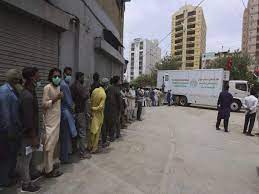 ISLAMABAD:The lowest death rate recorded in the fourth wave of the coronavirus pandemic.

Pakistan recorded 20 additional coronavirus fatalities on Tuesday morning, the lowest number of deaths from the virus in a single day since the fourth wave began in July.

As Pakistan grapples with the fourth wave of the epidemic, the number of coronavirus deaths and infections has been progressively reducing.

The 20 reported deaths on Tuesday are the fewest in more than three and a half months. Previously, on June 28, the government reported 20 deaths from the virus in a single day.

According to the National Command and Operation Center’s (NCOC) most recent COVID-19 figures, 43,786 coronavirus tests were performed across the country in the last 24 hours, with 603 persons testing positive.

The most deaths happened in Punjab in the recent 24 hours, followed by Sindh. Six of the 20 patients who died were on ventilators.

In Pakistan, COVID-19 infections are declining, with an average of 869 new cases reported each day. That’s 15% of the peak, which was the highest daily average reported on June 17.

So far, Pakistan has provided at least 93,551,193 doses of COVID vaccination. Assuming that each individual requires two doses, that would be enough to vaccinate approximately 21.6 percent of the country’s population.

Pakistan provided an average of 918,586 dosages per day during the most recent week reported. At that lowest death rate recorded, it will take a another 48 days to provide enough doses to cover the remaining 10% of the population.