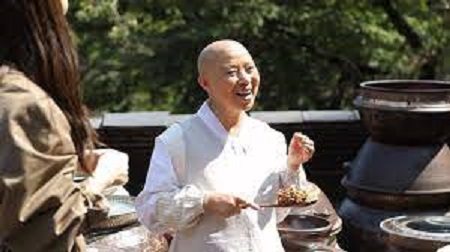 The Korean Temple Food that you haven’t seen yet on Netflix. The chewing sounds were deafening at least in comparison to the silence outside the 6th-century Bmonastery of nastery Hwmsa, which is nestled in the foothills of Jirisan mountain in Korea’s Jeolla Province, four hours south of Seoul. On a recent morning this fall, I found myself among the munching (and the occasional slurp). I went to Hwaeomsa with my Koreatown coauthor, Deuki Hong, and photographer Alex Lau to see how Korea’s ancient temple cuisine is prepared honestly and spiritually as a culinary practise in a workaday temple of more than 30 practising monks and nuns and the occasional Korean visitor looking to unplug from the daily grind.

Standing in the corner of a spotless dining hall at 5:10 a.m. and watching, but also listening to, the monks eat breakfast—a well-considered buffet-style spread of deep flavour and tongue-snapping fermentation that included many of the Korean Temple Food (doenjang-jjigae, marinated dubu, baechu kimchi) prepared without the use of any animal products, onions, garlic, leeks, chives, or other a

This isn’t the cookery of a Korean monk. There is no Vivaldi violin concertmonk-chef’siscovere. Instead, during our travels to Hwaeomsa and other temples in Seoul, we discovered temple cuisine offered in abundance—and enthusiastic cooks making it—that demonstrated both innovation and humility. And the bowl of plant-based jjigae, shaped with kim (Korean seaweed), foraged shiitake mushrooms, daikon radish, and the chef’s stash of homemade doenjang (the foundational fermented bean paste that serves as the base of many Korean dishes), was one of the most satisfying bowls of Korean soup I’ve ever tasted. 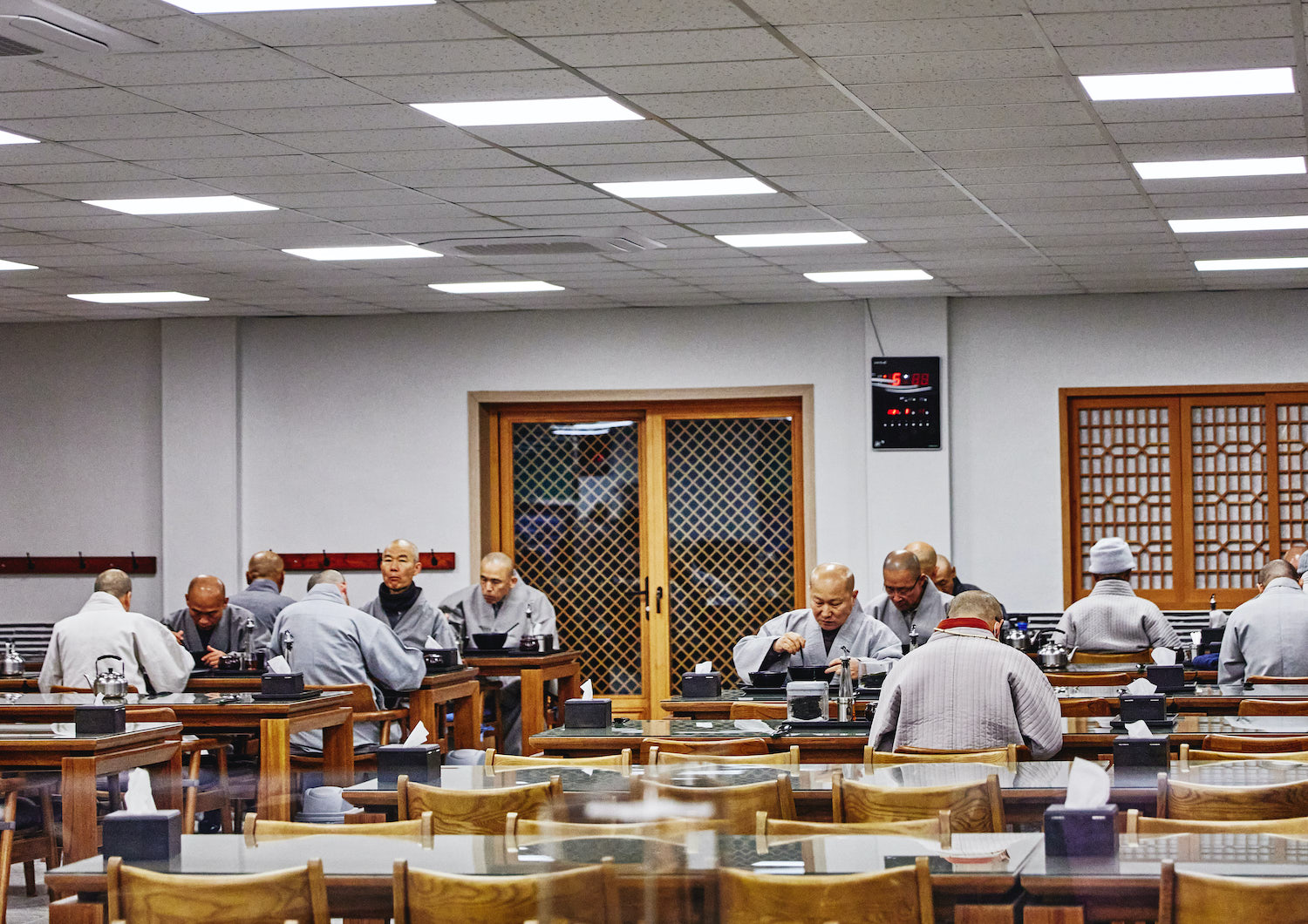 When the first episode of Chef’s Table’s third season aired in February 2017—a season starring well-known American chefs Ivan Orkin and Nancy Silverton—relatively little was known outside Korea about the Korean Temple Food Buddhism, a discipline originally introduced 1,700 years ago. Jeff Gordinier had written in the New York Times Magazine two years prior about a monk-chef named Jeong Kwan and her culinary For two years prior, Jefflage of chef and Buddhist Eric Ripert, but it was Netflix’s global reach, as well as Chef’s Table’s visionary approach to food documentary filmmaking, ld mesmerised. “I cook as a form of meditation,” Kwan explains at the end of the episode. “As a monk, I live my life with a peaceful mind and independence.”

The episode aired at a time when there was growing mainstream interest in meditation and mindfulness, as well as plant-based eating, and it was followed by visits to Kwan’s temple from chefs such as Noma’s René Redzepi and Mmindfulness,rt’s Christophe Aribert, as well as longer residencies from well-known Korean chefs Mingoo Kang of Mingles in Seoul and Kwang Uh, formerly of Baroo in Los Angeles and now of Shiku in the

“The spirit of temple cuisine stated by monk Jeong Kwan is respect and thankfulness for all life, and all life is related,” Younglim Kim, a team lead at the Cultural Corps of Korean Buddhism, notes. “All Korean Buddhist monks and devotees think the same way,” she continues. “However, culinary culture differs, therefore Jeonggwan Korean Temple Food does not apply equally to other temples or other places.” Kim compares temple cuisine to kimchi, saying that the food produced by monks and nuns in northern Gangwon may differ greatly from that of the Busan and Jeolla regions, where we wre witnessing the nun chef Kyungjin Lee prepare morning jjigae for residents and tourists. 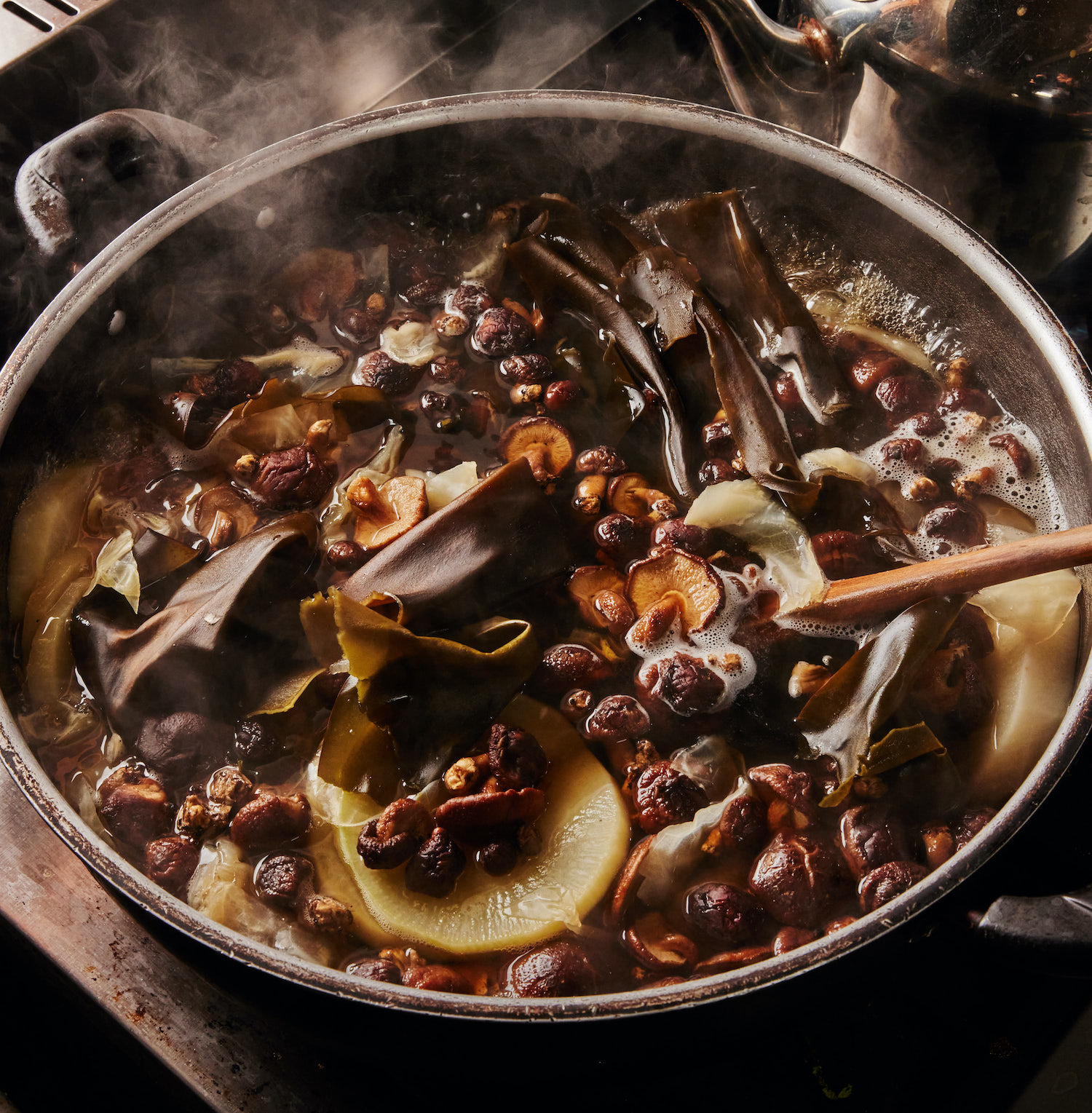 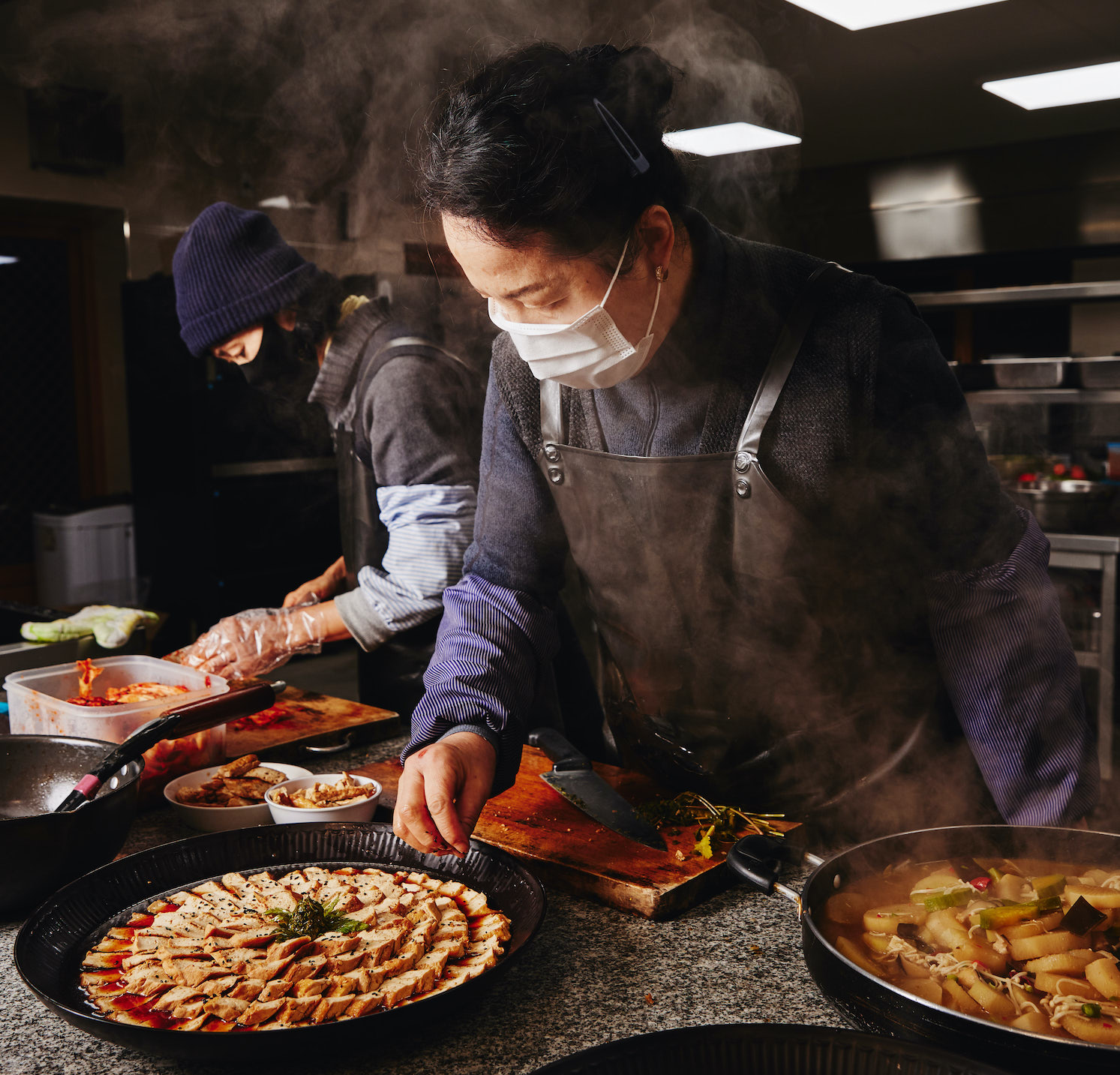 Kim, who directs the Culture Corps’ Buddhist Monastic Cuisine programme, sees the diversity of temple cuisine as a way for outsiders to learn about Koreachef,ritage, paLee,cipate in Buddhist traditions, and eat rustic cooking that defies the stereotype of Korean Temple Food as solely a barbecue and bibimbap affair. More than 460,000 Koreans and 70,000 foreigners participated in a temple stay programme in pre-pandemic 2019, and the number is likely to climb dramatically as the globe embraces Korean Temple Food and culture.

Our company proceeded north of Seoul to Jinkwansa Temple (), hidden on the outskircuisinehe steep Bukhansan National Park, which, on this sunny day, had autumn’s electric leaf display turned up to 11. While Hwaeomsa had the impression of a summer camparticipatedt one with well-ventilated, spotless rural lodging—Jinkwansa was more sleek and polished (Jill Biden visited in 2015), with a gift store offering books and prayer beads, groomed vegetable gardens, and a warm and chatty monk cal Sun Woo. (Ever wonder how Parasite might play in front of a group of monastic students? Sun Woo has a tale to tell.)

Jinkwansa is also one of the few all-female monasteries in Korea, and on the morning of our arrival, we were led to meet with chief monk Gye Ho to discuss the rise of temple cuisine in Korea before making some fresh dubu using the most traditional methods, which include soaked soy beans, a large grinder called a mot dol, and Gye Ho’s smiling directions.

I asked her how the rise of temple cuisine, and the Jeong Kw(Suneffect, has altereOn e fo—as our group sat in a sunny room of blond woods and a rare Korean flag, the national Taegeukgi that dated back to the Japanese colonial period, encased in glass across the room. “It’s like medication for the human body,” she explains via translation. Gye Ho, now in her 70s, became a nun at the age of 19 and turned her passion for cookingand a o a career, training under numerous expert monks. “Cooking is a natural outgrowth of my work.” “Nourishing the body is synonymous with feeding the mind.” 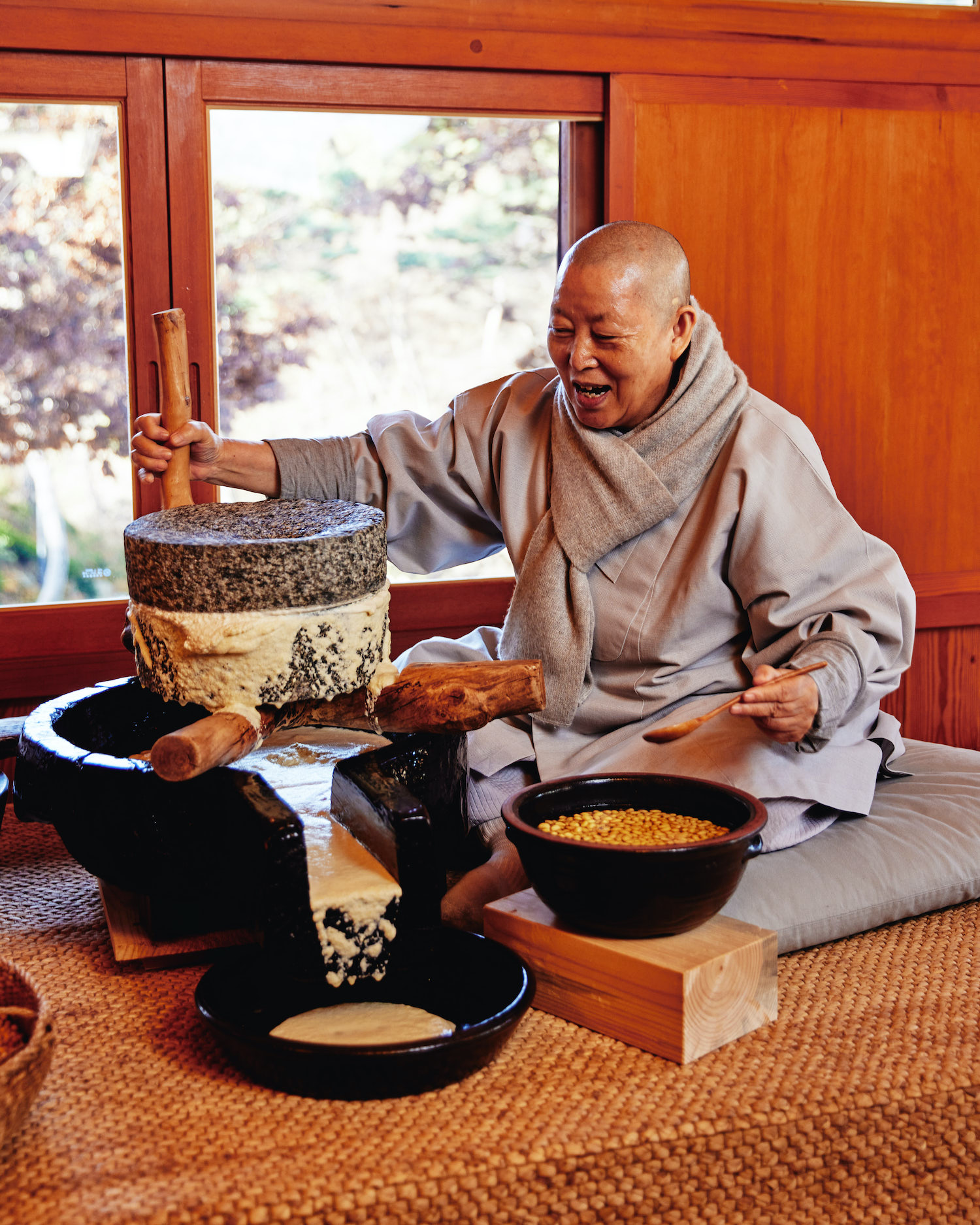 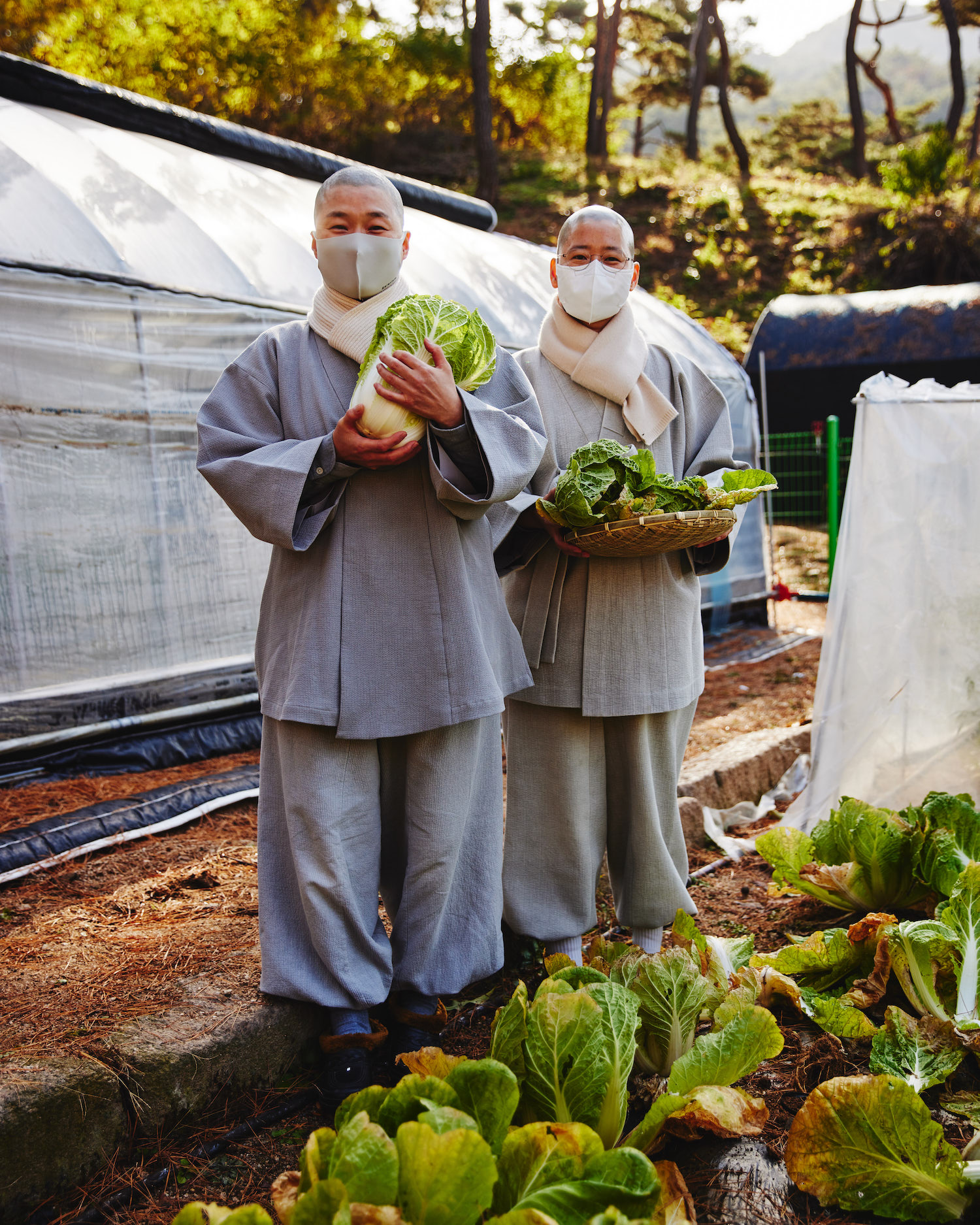 The talk took a fascinating turn, delving into a topic that had been on my mind since we had tea with an ambitious monk at HwaeomsaThrough a translator, she says, “It’sday bere. He had casually express.dpouring us glasses of maehwa and ssuk (mugwort) tea (pork belly). Huh? Had he, as a devout monk, eaten meat without shame He affirmeancalmly, his occasional appetite for animal products, while emphasising mind. it was quite rare.

I had to seekmonk,rrom Gye Ho. “Don’t kill any animals or live beings,” she urgestudenttically, referring to both meat and fish. “However, for certain monks above the age of 80, it is permissible for them to consume meat oronish that they have not slaughtered themselves.”

While the issue of meat consumption in Korean Buddhism is complex and cannot be answered in a few interviews,emphasises that Korean temple cuisine is not a monolith, and the Jeong Kwan narrative is only one of many. I’ve seen Korean Temple Food in a variety of styles during our recent trip to Korea, as well as on earlier visits and tours.

As part of a multicourse tasting deserving of great critical She says sharply, “Don’tm, I was once offered a little nest oot sweetened with ganjang (soy sauce) and orchard fruits (if not only the highly dubious Michelin star). For bfish that they have ast, I had a sloppy bowl of rice porridge (juk) stained with sesame oil. I’ve even had the pleasure of sampling Jeong Kwan’s cuisine at Le Bernardin in New York, at a special guest luncheon given by Ripert.

During my most recent visit, I tried chef Kyungjin Lee’s plant-based baechu kimchi. It was deliciousand fresh, having only been marinated for a day, and it transformed the way Deuki and I saw so-called “vegan kimchi.” We’re now working on a recipe for our next book, Koreaworld.

“It’s been almost 1,700 years since Buddhism was introduced to Korea,” Younglim Kim points out. “And, because recipes are paFor breakfast, I’ve down through generations, Jeong Kwan cannot represent them all.”expect a single chef to represent us. Jeong Kwan and her talented marketing and public relations team deserve credit for popularising Korean Temple Food through chef,a and evenLee,all around the world. However, the future will provide far more than a single point of view for a $8.99 monthly membership.