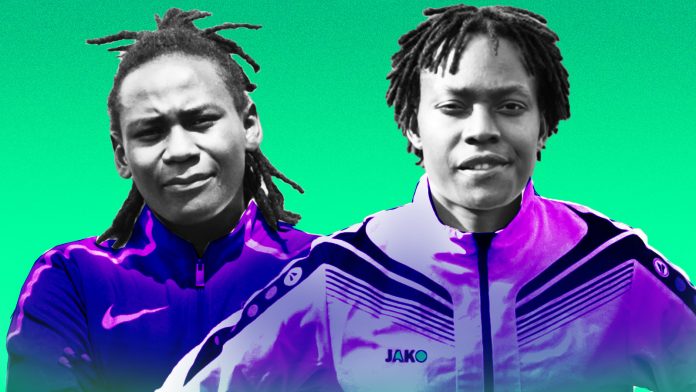 The great athletes who are battling for acceptance. Annet Negesa, an ambitious and motivated adolescent, pushed her body to run faster, and her body, ever loyal, obeyed.
Even before he had a coach, the middle-distance runner was qualifying for – and winning – big regional tournaments. She would fly to Daegu, South Korea, for the 2011 World Championships at the age of 19. The Ugandan athlete qualified for the 2012 London Olympics after finishing in the top three in the 800 metre and 1500 metre divisions in four international tournaments.

Negesa submitted to blood testing in August 2011, while competing in the World Championships. This was a prerequisite for all competitors competing that year, according to the International Association of Athletics Federations (IAAF, currently known as World Athletics). But, according to Negesa, she never received her test results, and life went on as usual: with hard training for the London Olympics.

Negesa received a phone call from her management while in Europe, just weeks before the competition, informing her that she would be unable to compete in the Olympics.

According to her, he stated that the blood samples revealed amounts of the hormone testosterone in her blood that the IAAF deemed excessive, and that she would need to undergo additional testing at the request of the athletics governing organisation.

Negesa’s bright future began to dim after that. She was taken to a specialty hospital in the south of France, the name of which was given to her by the IAAF. She got a medical examination there, which included another blood test and an MRI scan.

Again, Negesa claims she had no idea what was going on and was not provided any documents. “No one ever given me advice like, ‘If you do this, you’ll receive this afterwards.'” Nobody told me what the repercussions were.”

World Athletics denies this, stating in an email that “Ms. Negesa and her team were supplied with the results of the tests conducted.” The charity also states that it later informed Negesa through email that “it was critical that a medical practitioner in Uganda follow up with her and explain to her what the various therapeutic choices are.”

After being brought to the Women’s Hospital International and Fertility Centre in Kampala, Uganda, in November 2012, the then-20-year-old awoke following surgery to hear her internal testes had been removed. Negesa claims she was aware she was being treated for hyperandrogenism (her body’s naturally high amounts of testosterone), but the surgery was not what she had agreed to. “They suggested that I undergo simple surgery or use an injection [to remove] the extra testosterone in my body,” she recalls. My recommendation was to use the injection.”

According to a medical study obtained by CNN, doctors in Uganda “resisted starting her on oestrogen therapy.” Estrogen was critical in Negesa’s healing. “Once the testes are removed, like in this case, the blood testosterone and oestrogen levels fall to zero, and the athlete is even more hormone deficient than a post-menopausal woman,” says retired endocrinologist Peter Sonksen. Sonksen continues, “It is consequently critical to provide estrogen’replacement’ therapy.” In his or her absence, [the athlete] will experience a variety of problems affecting the majority of body systems.”

CNN was told by World Athletics that it “had no involvement in Ms. Negesa’s treatment” and that it would “had to ask to explain the reference in this letter.” Negesa’s body couldn’t perform as well as it used to since she was in pain and didn’t have the necessary after-care. Negesa said in her Human Rights Watch account that she had lost her university scholarship. Faced with public scrutiny for her sex as well, Negesa quickly sank into melancholy, noting that it was “extremely hard for a person like me… an intersex person” in Uganda. The German government awarded her asylum in 2019.

Negesa is still obviously affected by her experience in Berlin, in the shadow of the 1936 Olympic stadium. She tells CNN that she was perplexed when she discovered that her body was not what she thought it was, and that she felt powerless and entirely unsupported as her life disintegrated. “I was still a teenager, had no choice because I loved the sport… and they knew all the ramifications that would follow.” She goes on to say of the IAAF, “They violated my rights as a human being.” They treated me as though I were a guinea pig.”

The hospital refused to respond, citing patient confidentiality. “The IAAF hyperandrogenism standards indicate that the treatment must be given by a physician who is independent of the IAAF, and that the IAAF is in no way involved in the process,” World Athletics writes in an email to CNN. Under no circumstances may the athlete be coerced into undergoing any treatment.” In 2013, as Negesa battled to come to terms with what had happened to her, Maximila (Max) Imali was learning that athletic achievement could lift her and her family out of poverty in neighbouring Kenya.

She recalls her high school coach encouraging her to train for the 800m race rather than the sprints, saying, “You know, you can make your family live on another level.”
“I just wanted to run well so I could feed them,” Imali says of her family: Her mother, two siblings, and two orphans are also cared for by her. “I was extremely fired up.”
Imali was selected to compete in the World Junior Championships in Oregon in July 2014. “It was my first time attending such a large race,” she recalls. “After that, I realised I could do good.”

As a result, Imali boarded a matatu minibus from Eldoret to a hospital in an elite Nairobi area for a blood test and a medical examination.
Imali, like Negesa, claims she was provided little information about the operations or their effects. She claims of the hospital’s doctors, “They didn’t tell me anything about my body.” They were simply placing the results in the envelope after we finished each examination. The packet is then delivered to Athletics Kenya.”
It would be several months before Imali learned, over the phone, from her management that she would not be able to compete in the 800m division.

“Max, you cannot run because you have high testosterone in your blood,” she claims she was told. He went on to list all of the races she couldn’t partake in and shared an IAAF letter outlining the rules.
Imali went to see her mother, weighed down by the issues about her gender identity that the tests had raised. What she heard made her feel better. “From the moment you were born, I’ve been parenting you as if you were a female, and that’s all there is to it. “I know you’re a girl,” her mother said to her. However, Imali claims that her mother’s health suffered as a result of being rejected for the way God created her, as well as worries about her sporting career.

“My mom was hospitalized because of me, because of the pressure,” Imali says, her voice filled with sorrow and regret. “She died because of me. It still affects me because I always feel that I’m the cause of her death.”

Many sporting events, from track and field to gymnastics, swimming to basketball, are divided according to a binary separation of genders. Modern medical consensus notwithstanding, as far as much of the sports world is concerned, there are only two recognized categories: Men and women.

However, Negesa and Imali both have — or had — levels of testosterone that their sports’ governing body officials deemed too high for some of the women’s competitions.

Many sporting disciplines, from track and field to gymnastics, swimming to basketball, are classified into gender categories. Despite modern medical consensus, there are only two recognised classifications in much of the sports world: men and women. However, Negesa and Imali both have – or had – testosterone levels that their respective sports’ regulatory bodies deemed too high for certain of the women’s tournaments.

The focus did not come solely from sporting organisations. Over the years, media commentators have helped spread a limited view of what it means to be – and look like – a woman. Three days after the opening of the Rome Olympics in 1960, William Barry Furlong, writing for The New York Times, reflected: “More and more of the fair sex are competing in sports, posing a serious question: Do males make advances at sporty lasses?”

As “gender-normalizing” surgeries became more common in the Global North, and more athletes from the Global South began to dominate in track and field events, Dutee Chand, Maximila Imali, Annet Negesa, and Caster Semenya, among others, have come under the media spotlight and World Athletics’ watchful eye.

“World Athletics wants to recognise people whatever they identify,” Jonathan Taylor, World Athletics’ legal counsel, says CNN. “The difficulty with that is that we’ve already established that there has to be a differentiation between male and female competition in order to achieve justice and equality on the sports field.”

Taylor sees World Athletics in a dilemma, needing to weigh in on a subject it would rather not have to, but must, in order to remove the “enormous, insuperable advantage imparted by these higher testosterone levels” in events such as the 400m, 800m, 1500m, and 400m hurdles races. If you have a female gender identification but XY testes and male testosterone levels, you must determine what to do. You might say, ‘You cannot participate in the female category,’ but World Athletics does not want to do that because it wants to accept and recognise gender identity.

When it comes to athletic performance, Karkazis and her co-author, Rebecca M. Jordan-Young, discuss research that have found no link between high natural testosterone and speed and power, as well as others that indicate the opposite to be true: High testosterone levels contribute to poor performance.
According to Karkazis, the lack of clear proof has not prevented World Athletics from developing its policies. She cites, for example, a judgement by the Court of Arbitration for Sport (CAS) stating that evidence of actual meaningful athletic advantage in the 1500m and 1 mile races “could be classified as sparse.”

Negesa, on the other hand, has returned to the track after nearly a decade away and is letting herself to dream of Olympic success once more: “I simply pray to God that I continue doing improvements every day so that I can fulfil my goal.” It was taken away from me in 2012… I don’t want to be late again.”