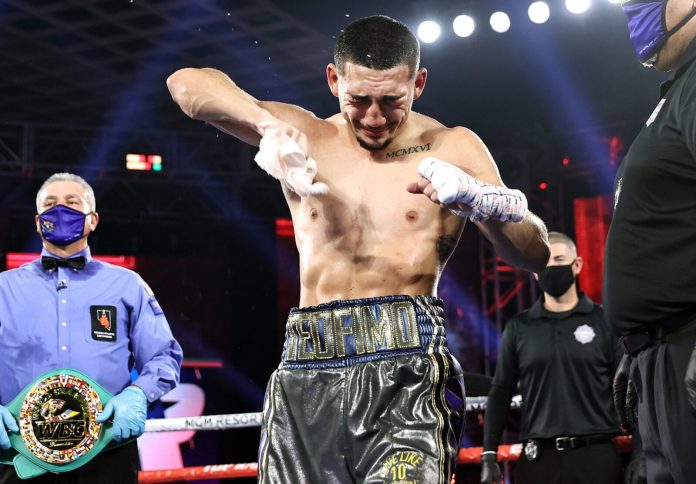 Teofimo Lopez’s much anticipated title defence is only a day away. The American will face George Kambosos Jr. in Madison Square

Garden’s Hulu Theater. Lopez, who won the belts last year, will seek to defend them and establish himself as a legitimate champion.

Lopez disclosed all in an interview with Michael Benson, during which he analysed the problems of modern boxing. “How did Devin Haney

get that belt?” Lopez inquired of Benson.

Benson responded, stating that Haney had been promoted from interim champion to WBC champion. Lopez basically claimed that Haney

was not a legitimate champion and that the WBC awarded him the title.

Lopez then discussed his experience in the US Olympic Trials. “They did this to me back in the 2015 US Olympic trials.” I won the US

Olympic trials in 2015 and will compete for the United States at the Olympics. For the Olympic Games in Rio de Janeiro in 2016.”

“I’ve gotten it. I got it in Reno, Nevada… Shakur Stevenson, Nico Hernandez, Antonio Vargas, and Gary Russell are on the list. You know,

the entire shebang, all nine of it. Teofimo Lopez was on that list, and guess what they did with it? They handed me a gold medal for a lousy

piece of sh*t, right? But it wasn’t gold; it was a wonderful little tiny medal, says the 132-pound winner.”

“They shoved me to the side, and then they pushed this other guy, Carlos Balderas, to the right.” “And they placed him in the ring while I

had to sit there and watch after winning the US Olympic Trials, sobbing at 18 years old, and witnessing them perform the political sh*t that

they do in this sport,” Lopez recalled.

At the last news conference, there was no respect between Teofimo Lopez and George Kambosos Jr.

During their final news conference before the bout, Teofimo Lopez and George Kambosos squared off. As they glared at one other for a

minute, there was no love lost between the two warriors.

The situation between the two fighters had turned sour earlier this week when George Kambosos Sr. manhandled Teofimo Lopez Sr. during a

media workout after Lopez Sr. went aggressively toward the Kambosos camp. That encounter was a watershed moment for both fighters,

and they have publicly stated their hatred for the opposing camp and fighter.