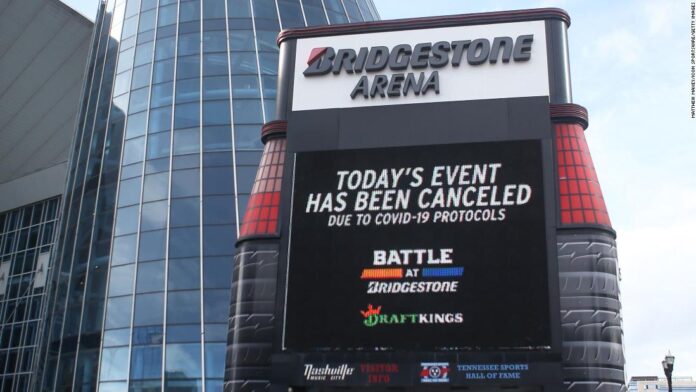 Because of the new Covid-19, sports are being cancelled. The cancellations and postponements are the most recent disturbance in the United States as a result of the rising spread of new Covid-19, with several sportsmen being ordered to quarantine pursuant to league guidelines.

The Columbus Blue Jackets and Montreal Canadiens have been shut down till at least the Christmas break, December 26, due to an increase in positive Covid-19 cases and “fear about ongoing COVID dissemination,” the NHL announced on Monday.

The Blue Jackets’ next two games, on the road against the Buffalo Sabres on Monday and at home against the Sabres on Thursday, have been cancelled.

The Canadiens will take a break from team activities. Their next games this week had already been rescheduled.

Since last Monday, 37 games have been rescheduled, for a total of 42.

The NHL and the National Hockey League Players’ Association will make a decision on when each team’s training facilities will reopen in the coming days, according to the league.

“With the number one priority of ensuring the health and safety of our NHL community, and in the face of changing and unpredictable conditions, we are determined to remain flexible and adaptable both in terms of scheduling and in adjusting Protocols as needed,” the league and the NHL Players Association said in a joint statement.

The NHL and NHLPA are also “actively exploring the topic of NHL Player participation in the 2022 Winter Olympics in Beijing, China,” according to the statement.

Due to an increase of Covid cases, the league stated on Sunday that all Detroit Red Wings games will be postponed through December 26. It is unknown when the team’s practise facility will reopen. This decision will be made collaboratively by the NHL and the players’ union.

The Toronto Maple Leafs were also suspended by the NHL on Sunday, citing a “growing number of positive instances.” According to the league, the Maple Leafs will suspend all team activity until December 26.

The Colorado Avalanche and Florida Panthers will be closed until December 26 owing to “concern with the number of positive cases over the previous two days as well as fear for further new Covid-19 spread in the coming days,” according to the league.

The NHL also prolonged the closure of the Calgary Flames until December 26. Since the shutdown began on Monday, the Flames have missed six games. The Flames have 16 players in the NHL’s Covid-19 protocols as of Wednesday.