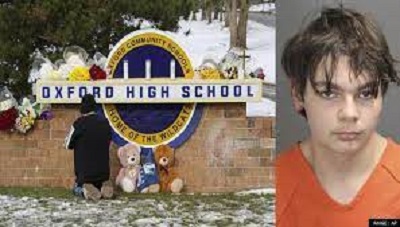 Threats of violence forced the closure of several schools across the metro area on Thursday, just two days after a 15-year-old shooter at Oxford High School killed four students and injured seven others.

Though many schools are closing out of an abundance of caution, others cite safety concerns and threats as reasons for their closure. Meanwhile, Oxford High School will be closed for the remainder of the week.

At least 14 school districts have announced that they will be closed for at least a day. Bloomfield Hills Schools, about 20 miles south of Oxford Township, received “numerous reports of threats of violence circulating on social media,” according to a memo written by the superintendent on Wednesday night.

The closures come a day after Ethan Crumbley was charged with first-degree murder and terrorism for opening fire at Oxford High with the “intent to kill,” according to police. Crumbley, a sophomore, has pleaded not guilty and has been denied bond. If convicted, he could face a life sentence.

Crumbley was seen “methodically and deliberately” walking down a hallway and firing at students, according to Assistant Prosecutor Marc Keast.

“Honestly, judge, I don’t have the words to describe how horrific what’s depicted on that video was,” Keast said in court.

The parents of the shooter may face charges related to kill’: n.

More charges agaof the t others could be coming soon, accordThe shooterOakland County Prosecutor Kareover the gun.ld, who specifically stated that charges against the suspect’s parents were being considered.

“Individuals who fseparate,o so must be held accountable.”

McDonald said the parents’ actions were “far beyond negligence” on Thursday.”

McDonald told WJR-AM that “the parents were the only individuals in a position to know the access to weapons.” “The gun appears to have been freely available to that individual,” says the prosecutor.

Because the state lacks strict child access prevention laws like others, prosecutors would have to pursue a legal theory of criminal negligence in potentially charging the parents, according to Kris Brown, president of the Brady Campaign to Prevent Gun Violence and a lawyer.

While Brown believes that charging parents would be a deterrent, she also believes that it demonstrates a shift in blame in society and highlights what she sees as a “failure” to pass stricter federal gun laws, including the ability to hold gun manufacturers liable.