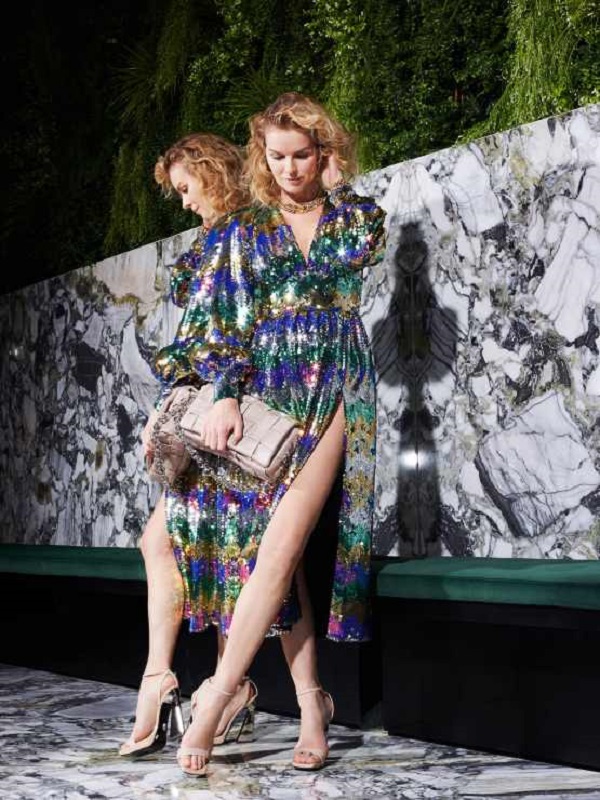 Philipp Plein is having a lot of fun with women’s clothes, which is a new area for his brand. His pre-fall collection was full of rhinestones and sequins in bright colours, on everything from mini dresses to loose sweatshirts for people who aren’t as young as one might think, but still want to look good.

Look book images were done by 90s supermodel Eva Herzigova. She looks like grown-up girls who might lounge around in sequined tracksuits in mint and purple, or wear sparkling minidresses to dance the stress away in Mykonos and Saint Tropez. This is how you would dress if you were a grown-up girl.

Bodycon dresses with a wet look were worn under puffer jackets with big golden studs. Knitwear was used for sinuous ribbed knit frocks, some with crisscross drawstrings at the back or cutouts on the side, and graffiti-painted cardigans with faux fur trimmings.

In this collection, the designer paired bleached denim with sartorial coats, girly pleated and ruffled frocks with bows, leopard print pantsuits, and perfectly-fitting biker jackets to make the more casual outfits more accessible. This was also the first time the brand had a costume jewellery line.

At the company’s recently opened headquarters, he said, “We wanted to make the look also wearable, not just show pieces. We wanted to show it on real women, not just Instagram models or 20-year-old influencers.”

In general, the clothes were casual and glamorous at the same time, which reflected Plein’s excitement about all the projects he was working on, including the relaunch of the Plein Sport line as an activewear brand.

In Plein’s words: “Our woman either goes to the gym and hangs out with her friends at home, or she goes to a party.”

When he comes up with new ideas, Plein is always trying to find the right balance between the casual and the flashy parts of his creative process. But at heart, he is a maximalist.