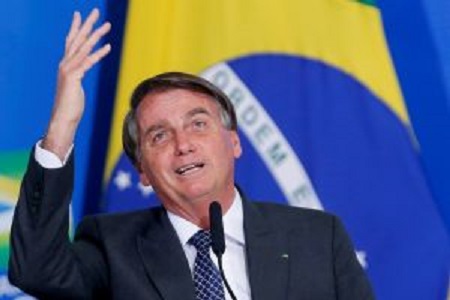 Brazil is fighting a pandemic of inflation. Inflation is soaring in Brazil, forcing a country with one of the highest Covid-19 fatality rates to deal with the pandemic’s economic consequences.

While the global economy is expected to grow by more than 4% next year, including in Brazil’s neighboring countries, more economists predict that Brazil will remain in recession until 2022, as it faces one of the world’s highest annual inflation rates of 10.7%.

“Brazil sticks out—its inflation rate has grown far faster than virtually any other emerging economy, and you can see it affecting consumers,” said William Jackson, chief emerging-markets economist at Capital Economics in London.

As businesses and consumers emerge from lock downs, inflation rates have risen to their highest levels in decades, driving up energy prices and causing supply bottlenecks from Canada to Germany.

According to the government, inflation in the United States reached a 39-year high in November.

Brazil, which suffered from painful hyperinflation in the 1980s and 1990s, is now fighting an even harsher battle against its old foe—one that experts predict will stifle GDP for at least the next year. Credit Suisse and Ita Unibanco, one of Brazil’s largest banks, recently lowered their growth estimates, predicting a 0.5 percent contraction in the country’s economy next year.

Before the outbreak, Latin America’s largest economy was barely growing at all. Recent growth has been impeded by a steep drop in the price of iron ore, one of Brazil’s biggest exports, since July. The return of inflation, however, is proving to be the most significant impediment to economic recovery, according to experts.

According to the Organization for Economic Cooperation and Development, Brazil’s 12-month inflation rate of 10.7% is the third highest among the major established and emerging nations that make up the Group of 20, behind Turkey and Argentina. A severe drought, the worst in in a century, has fueled inflation by depleting hydroelectric reservoirs and increasing demand for more expensive thermal power plants.

A steep depreciation in the Brazilian real, which has lost roughly 25% of its value versus the dollar in the last two years, has pushed up the cost of imported products, notably gasoline, contributing to inflation.

Brazil’s history of hyperinflation makes it more difficult to combat current price increases. One relic is indexation, in which the country relates costs like wages to inflation to safeguard enterprises’ and typical Brazilians’ purchasing power in the face of rising prices.

On the downside, transient price shocks, such as those affecting the global economy, can become permanent. For example, a brief increase in the price of oil raises earnings and improves demand for other items.

“Brazil’s condition is worse than anywhere else in Latin America and the world,” said André Perfeito, head economist at Necton, a brokerage in So Paulo. “Indexation has the unintended consequence of amplifying external price shocks.”

Some economists see the region’s recent swift progress in vaccinating large swathes of the population, permitting an abrupt return to a nearly normal existence, as a cruel reward for the region’s rapid progress in vaccinating large swaths of the people. About 65 percent of all Brazilians are now fully vaccinated against Covid-19, which is higher than the United States and a significant increase from only 11 percent six months earlier.

The Brazilian central bank’s interest rate hikes have sparked fears that they could suffocate the country’s post-pandemic recovery.

The poor, who were already suffering from the pandemic, have been crushed by the return to double-digit inflation. According to the University of Oxford’s Our World in Data project, more than one in every nine people who died from Covid-19 over the world came from Brazil, which has the highest per capita death rate from the disease among the 40 most populous countries.

Lucilene de Souza, a single mother of three from So Paulo, has been unable to consume meat for months, as have millions of Brazil’s poorest households. She spends her days begging for food outside a shopping mall after losing her job at a restaurant when the pandemic struck nearly two years ago.

“My youngest is only four years old, and I can’t afford what he requires,” she explained. “With prices like this, government handouts aren’t enough.”

Economists anticipate that 12-month inflation would decrease to 5% by the end of next year and 3.5 percent in 2023, indicating that the country’s price increases will not spiral out of control. Instead, the greatest risk is that Brazil’s central bank’s aggressive interest-rate hikes to battle inflation will suffocate any post-pandemic economic rebound.

The central bank has increased the benchmark lending rate by more than 7 percentage points to 9.25 percent since March, bringing it from a record low of 2% to its highest level in more than four years. It is expected to hit double digits next year, according to economists.

In Brazil, where older generations remember the dark days of hyperinflation wiping out their savings and sending them scurrying to the grocery store after every paycheck, the central bank is still fighting to establish its worth.

While the United States’ Federal Reserve and other developed-country central banks have adopted a cautious approach to what they perceive as transient price shocks in the aftermath of the pandemic, Brazil does not have that luxury. According to Alberto Ramos, an economist at Goldman Sachs, the central bank has little choice but to raise rates aggressively if it wants to avoid a worsening scenario.

If the central bank does not hike rates, Brazil risks losing control of inflation expectations, allowing businesses to charge more and employees to demand greater salaries if they expect prices to rise, fueling inflation. Given Brazil’s history of soaring prices, any indication that the central bank is losing control of inflation risks frightening away foreign investors, resulting in mass capital flight, a depreciation of the Brazilian currency, and a resurgence of inflation.

“If they do nothing, inflation will rise…

Mr. Ramos explained that “it gets a lot more expensive to bring down later on.”

Economists say the global price spikes could not have come at a worse moment for Brazil’s central bank.

The government granted the central bank legal independence earlier this year, after decades of dispute. Internal pressure has mounted on the central bank’s monetary committee to become even more hawkish. This year’s 12-month inflation is already likely to exceed the country’s 3.75 percent objective by a significant margin.

Mr. Perfeito added, “The central bank will not want to miss the 2022 objective either.” “Can you imagine how that would appear?” They gain independence, then fail to meet the aim for the second year in a succession.”