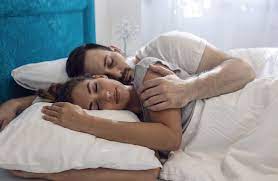 Partner’s scent may help you to get sound sleep


Wrapping your pillow in your amorous partner’s favorite t-shirt might be all you need. The aroma of a love companion, according to new research, can help you sleep better. This is true regardless of whether you are consciously aware of the scent’s presence.
Frances Chen, a researcher at the University of British Columbia in Vancouver, believes that “Close relationships are important for human health and well-being, according to a growing body of evidence, but less is known about the impact of fragrance in relationships and social support processes. The current study adds to the growing body of evidence that simply smelling a loving spouse enhances sleep quality.”

The previous study has shown that romantic relationships and close physical contact can have a variety of physical and mental benefits, including helping people sleep better.
Chen and graduate student Marlise Hofer set out to learn more about the relationship between romance, smell, and sleep.
Chen and Hofer started their study by having one member of a long-term heterosexual pair wear a simple cotton T-shirt for 24 hours. During this time, the user was instructed to refrain from engaging in normal scent-producing activities such as eating spicy foods or engaging in strenuous exercise. Perfume, cologne, and antiperspirants were also forbidden.

After that, the couple’s second member was given two identical shirts, one that had previously been worn by their partner and the other that had either been worn by a stranger or was scent-free.
When participants utilized their partner’s used, odor-bearing T-shirt as a pillowcase, they got an extra nine minutes of sleep per night on average. This translates to an extra hour of sleep per week without having to spend any more time in bed. Participants slept more efficiently, which meant they spent less time tossing and turning, which contributed to the gain. A wrist-worn sleep monitor that observed movement throughout the night was used to determine sleep efficiency.

Each morning, participants self-reported sleep quality, which was higher on nights when they thought they were sleeping with their partner’s fragrance.
“The degree of the effect we saw in our trial was comparable to that seen with melatonin pills, a regularly used sleep aid. The findings imply that the aroma of our loved ones can have a significant impact on our health “Hofer said.
Simple measures like traveling with a partner’s scarf or shirt may have measurable effects on our sleep, according to one research. Future research could look into if a love partner’s perfume has any other health benefits besides stress and sleep.