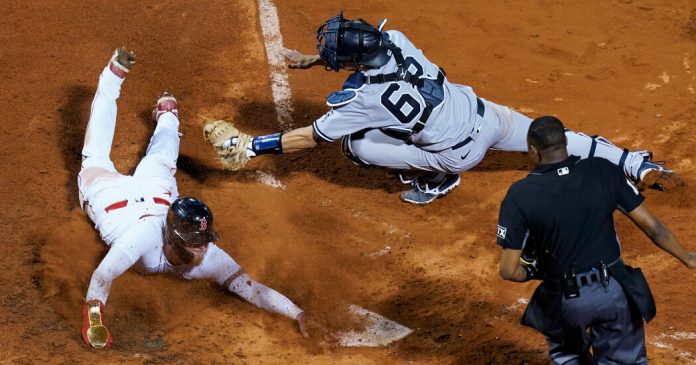 Old rivalries take on new life when playoff positions are on the line. Few things are more exciting than traditional rivals competing for a postseason spot in late September. While five of baseball’s six divisions appear to be locked up, and the wild-card field in both leagues is shrinking, the next ten days should be filled with intrigue thanks to two rivalries that are nearly as ancient as baseball.

The Yankees and the Boston Red Sox are vying for one of the two open wild-card slots in the American League, and one of them might miss the playoffs if they don’t win their three-game series starting Friday.

Wild Card in the American League

Both clubs have had ups and downs this season, but the Red Sox (88-65) lead the Yankees (86-67) by two games for the AL’s top wild-card slot with nine games remaining. The surging Toronto Blue Jays (85-67), a team with a top candidate for the Cy Young Award in Robbie Ray and a run differential (+171) greater than the teams ahead of them combined (+118), are just a half-game behind the Yankees — and currently not in line for a postseason spot entering Thursday’s games.

The series in Boston this weekend may provide some light on the situation. On Friday, the Yankees’ Gerrit Cole will meet the Red Sox’s Nathan Eovaldi in an ace-versus-ace matchup. Nestor Cortes will start for the Yankees against Nick Pivetta in Saturday’s game, which will have a significant drop in star power. Jordan Montgomery will face Eduardo Rodriguez on Sunday night in a game that will be somewhere in the middle.

A sweep by either club would substantially change the race, and the Blue Jays, who begin a four-game series in Minnesota on Thursday and will visit the Yankees in Toronto next week, may benefit from the Red Sox and Yankees squabbling.

Is it fair that one of these teams would miss out on the playoffs when all three would be comfortably leading the N.L? East and vying for the A.L. Central division title?

The Giants (99-53) have glided through the regular season, becoming the first club to win 70, 80, and 90 games. They were written off by most experts before the season. They’ll also be the first to reach 100, thanks to a mix of flashback seasons from mainstays from the team’s glory days and breakout seasons from underappreciated signings. They’ve hit so many home runs that the team’s third-base coach, Ron Wotus, may be out of ways to high-five people.

It’s tempting to imagine the Dodgers will be practically unbeatable once October arrives, thanks to the addition of Max Scherzer and Clayton Kershaw’s return from injury, but unless they can overtake San Francisco for the division lead, everything will rely on the luck of a single wild-card game.

Both teams have it pretty simple down the stretch, as they get to beat up on average Arizona and poor Arizona. However, San Francisco’s third opponent in the next ten days is the Colorado Rockies (71-80); the Dodgers must conclude with three games against a good Milwaukee squad that may be motivated to finish well.

The good news for baseball is that a win by either the Giants or the Dodgers in the wild-card round would set up a fascinating division series between two 100-win teams. The bad news is that neither club will be able to advance past that stage.

The People of the Other Races

After the N.L. West and the A.L. wild card, the only real chances for movement are in the N.L. East, where the Philadelphia Phillies (78-74) are attempting to challenge the Atlanta Braves (80-70), and the second N.L. wild card, where the Cincinnati Reds (78-74) have fallen too far behind the Cardinals.