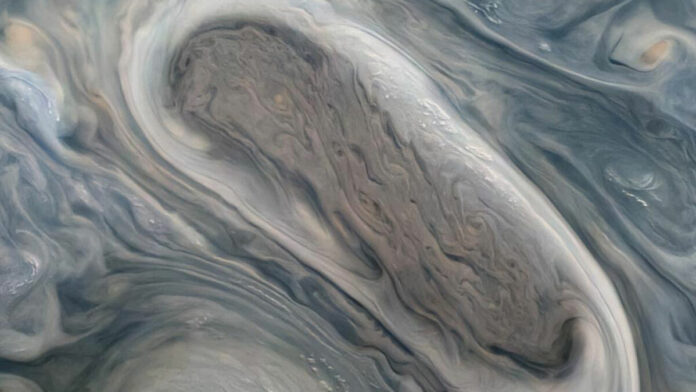 NASA released some incredible new images and sounds from Jupiter orbit. A fresh Juno orbiter research dump has offered all of us space nerds a great holiday treat: images and sounds from our solar system’s largest planet and its largest moon. The images of the whirling gas giant’s “surface” are as beautiful and artistic as Jupiter fans have come to expect, but the audio track is the true pleasure.

The 50-second movie, captured by Juno’s Waves instrument, which detects electric and radio waves in a planet’s magnetosphere, emits some genuinely strange noises. The rapid rise to a substantially higher pitch at roughly the 30-second point, according to researchers, has a simple explanation.

“This soundtrack is just crazy enough to make you feel like you’re riding along as Juno sails past Ganymede for the first time in more than two decades,” Scott Bolton, a principal researcher on the Juno project, said in NASA announcement. “If you listen carefully, you can hear a dramatic transition to higher frequencies near the halfway of the video, indicating arrival into a new section of Ganymede’s magnetosphere.”

Another project lead researcher, William Kurth of the University of Iowa, believes the change in frequency is caused by Juno “moving from the nightside to the dayside of Ganymede.”

To be clear, this doesn’t imply you’d hear what’s in the tape NASA published if you happened to be standing on Ganymede’s surface. Juno’s magnetic and radio waves are essentially data points; NASA crew is responsible for altering their frequency into a range that most people can hear without help.

The Waves data was obtained in June 2021, during the same Juno flyby that provided us with this spectacular new image of Ganymede during the summer.

The Juno data transfer also provided us with two fresh views of Jupiter. This one, found on November 29, might be an artist’s representation of the planet.

It isn’t, though. The image, taken by Juno’s “visible-light imager,” provides a close-up view of two of the planet’s churning, roaring storm systems.

Another view from Jupiter compares one of the planet’s storms to an Earthly algae growth recorded by satellite photos in the Norwegian Sea. Lia Siegelman, an oceanographer, initiated the comparison. She sees satellite photos like this as a chance to get a deeper knowledge of Earth’s seas.

“When I observed the richness of the turbulence around the Jovian cyclones, with all the filaments and smaller eddies,” Siegelman said, “it reminded me of the turbulence you find in the water near eddies.” “These are particularly visible in high-resolution satellite photos of vortices in Earth’s seas revealed by plankton blooms that function as flow tracers.”