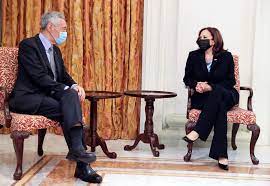 In Southeast Asia and Uniform, Kamala Harris. In normal conditions, any solo international journey by the United States’ first female vice president and the country’s first female vice president of color would elicit first-degree attention. Not only in terms of her speeches and joint press conferences but also in terms of her ceremonial appearances. The emphasis is on the last word.

After all, as a trailblazer and one of the few women leading a country on the global stage (at a time when one of the most famous, Angela Merkel of Germany, is ready to step down), every word and decision she makes has the symbolism of the trailblazer. Her choices have an impact not only on herself but also on others who come after her and will learn from her example.

Nonetheless, Kamala Harris’ recent trip to Southeast Asia, which ended on Aug. 26, was significant in part because the focus was on what she said and how little reaction there was to the trip’s theatre. This is very astonishing when you consider the formal choreography of such trips, which are a dance between public performance and private policy conversations.

That could imply that we have lost interest in the idea of a female leader, a theory that falls into the too-good-to-be-true category. Alternatively, it implies that Kamala Harris actively and carefully built her image in order to guarantee that it did not distract from the task at hand.

She wore only dark pantsuits in navy, grey, and black from the evening of Aug. 20, when she departed Washington for Singapore, through her time in Vietnam, with a modest flag pin on the lapel, plain white or light blue shells beneath, and her signature simple strand of pearls.

With the Delta strain and other variants of the virus spreading a cloud of fear over the world’s efforts to combat the epidemic, her dark outfit reflected the world’s somber mood.

Her clothing choices also helped her fit in: not only with her male classmates, who were dressed similarly but also with political tradition as it exists in the collective consciousness. After all, black suits are effectively a euphemism for generic world leader uniforms, which is why people freak out when a president wears beige. (Beige! Oh my goodness! Oh my goodness!)

That, in the end, was the most important takeaway from the vice president’s stagecraft. More than that, Kamala Harris checked the diplomatic dress boxes, wearing American designers (Prabal Gurung, Altuzarra) and, in keeping with her mandate to focus on climate change, only garments she already owned.

Given that Ms. Harris has pointedly strayed from the bled-into-the-background uniform in previous moments in the spotlight when she wore a suffragist white suit on the evening Joe Biden declared victory in the presidential election; a bright purple coat and dress melding blue and red at her swearing-in, and a cream pantsuit at the State of the Union.

It was also beneficial from the perspective of a number two who does not want to steal the focus from her boss. Or to divert attention away from the pressing issues of the day (not to mention demonstrate discipline and an ability to stay resolutely on message). Even if, while witnessing the adventure unfold, it was difficult not to wish that a woman didn’t have to dress in generic male camouflage to play her part.

Clothing may be used to transmit a multitude of messages, including unity, hope, allyship, and resolution, and it is a tool that women have the most access to for obvious reasons. They should not have to give it up in order to be taken seriously. Nobody should.

Maybe that will happen, legitimizing the chance for everyone to use clothes (and, dare we say, fashion) to its fullest, most diversified potential. For the time being,Kamala Harris must strike a balance between representing her administration and making history. It’s possible she won’t be able to serve both masters. However, that would be interesting to watch.