Home Life Style A relationship that is open, Is it possible to have?
Facebook
Twitter
Telegram
WhatsApp 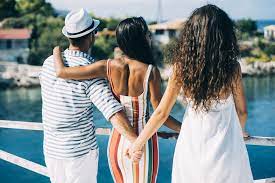 A relationship is one in which partners have consented to engage in sexual activity with someone other than their primary romantic partner while keeping the pair bond intact.

“We all know that communication is beneficial for all partnerships. It is, nevertheless, crucial for nonmonogamous couples as they manage the additional hurdles of maintaining a nontraditional relationship in a monogamy-dominated culture “Ronald Rogge, associate professor of psychology and director of the Rogge Lab, where the study was done, agrees.

The study’s researchers analysed distinctions and nuances within several sorts of nonmonogamous partnerships before assessing the success of each type separately.

The findings, which were published in the journal ‘Sex Research,’ highlighted specific criteria under which nonmonogamous relationships are likely to prosper and those under which relationships tend to fail.
Responses from 1,658 online surveys were analysed by the researchers. The majority of respondents (67.5%) were in their 20s and 30s, 78% were white, over 70% identified as female, and the majority were in long-term relationships (on average nearly four and a half years).

The researchers used the ‘Triple-C Model’ of mutual consent, communication, and comfort to analyse three critical variables for each connection.
Significantly, they classified study participants into four types of connections.
1- Two monogamous groups, one for earlier and one for later stages of monogamous relationships.
2- Consensual nonmonogamous (CNM) partnerships, which are distinguished by a lack of interest in monogamy and a high level of mutual consent, comfort, and discussion about commitment with someone outside the relationship.
3- Partially open partnerships, with ambiguous feelings about monogamy and lesser consent, comfort, and communication.
4- One-sided sexual interactions with someone other than the primary partner in which one partner seeks monogamy while the other partner engages in sex outside of the existing relationship with minimal levels of mutual consent, comfort, and nearly no communication.
The data revealed that monogamous and consensual nonmonogamous groups performed well in their relationships, whereas partially open and one-sided nonmonogamous groups performed poorly.
People in three nonmonogamy partnerships who reported a high level of sexual sensation seeking were more likely to actively seek new sexual partners and to have contracted a sexually transmitted disease.

The consensual nonmonogamous group also contained the most heteroflexible (mainly heterosexual but open to sex with same-sex partners) and bisexual respondents, implying that members of the LGBT community may be more at ease with nontraditional relationship patterns.
Overall, the one-sided group performed the worst, with the highest proportion of people severely dissatisfied with their relationships: 60%.