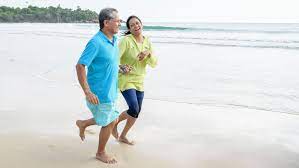 People who are optimistic, according to new research, contribute to their partners’ health by reducing the risk factors that lead to Alzheimer’s disease, dementia, and cognitive decline as they age together.
According to William Chopik, co-author of the study and assistant professor of psychology, “Because we spend so much time with our partners, they may push us to exercise, eat healthier, or remember to take our medications. When your partner is upbeat and healthy, it can help you achieve comparable results in your own life. By living longer and avoiding cognitive problems, you can actually have a brighter future.” The results of the research were reported in the Journal of Personality.

To develop better lifestyles, an upbeat companion might suggest eating a salad or working out together. If you quit smoking or start exercising, for example, your partner is likely to follow suit within a few weeks or months.
“We discovered that a lot of the risk factors for things like Alzheimer’s disease or dementia are things like living a healthy lifestyle,” Chopik explained. “A healthy weight and physical activity are significant determinants.” There are also some physiological indicators. People who are married to optimists appear to perform better on all of those measures.”

The study, co-authored by MSU graduate student Jeewon Oh and Eric Kim, a research scientist in the Harvard T.H. Chan School of Public Health’s Department of Social and Behavioral Sciences, monitored over 4,500 heterosexual couples for up to eight years from the Health and Retirement Study. Because of a healthy home environment, the researchers discovered a possible correlation between being married to an optimistic individual and delaying the onset of cognitive decline.

“Optimists, in a way, lead by example, and their partners follow suit,” Chopik added. “While there is some data on people being jealous of their partner’s good traits or having negative emotions to someone attempting to control you, there is also research that suggests that being optimistic is linked to seeing your relationship in a favorable perspective.”
According to the findings, when couples recall shared events together, they recall more details from the memories. Google’s tearjerker Super Bowl ad “Loretta,” in which an elderly man uses his Google Assistant to assist him to remember facts about his late wife, is a recent example, according to Chopik.
“All he was remembering were good things about his spouse,” Chopik said. “The Google commercial is based on science. Positive parts of their connection and personality were among the recollections that were recalled.”