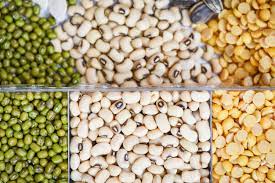 Get Excited About Fresh Beans and Grains

Abra Berens is leading our party through the literal fields of grain, Turkey Red wheat to be exact, at Granor Farm in Three Oaks in the southwest corner of Michigan. Berens, a farmer turned chef and multi-cookbook author, oversees Granor’s culinary programme, which highlights the region’s agricultural diversity through a series of weekly farm dinners. Berens’ innovative cooking, as well as her keen interest in experimental agriculture and agricultural politics, is a cross between Dan Barber’s Blue Hill at Stone Barns, Christian Puglisi’s Rel, and a Sweetgreen seasonal salad drop. She puts the farm at the centre of the dialogue while aiming for the maximum level of delectability. And she follows through.

Her cooking—and, by extension, her vegetable book, Ruffage, and her latest grain and legume-centric collection, Grist—are approachable, but not always simple. A buckwheat crepe recipe spreads across several pages and includes versions with mascarpone and berries, fried egg and sautéed kale, ratatouille and gruyère, and goat cheese, shredded Brussels sprouts, and hazelnut.

Grist handles the chapters devoted to grains, beans, seeds, and legumes similarly, devoting equal emphasis to sprouted buckwheat, cooked maize, and wheat berries, with each entry having a variety of recipes, meditations, and farmer interviews. It’s the chef’s most extensive book to date, and a book devoted to Midwestern fruit (!) is planned for the next few years to round out the salad bowl and bread basket trio. We sat in the sun on Adirondack chairs after the tour and caught up on cooking beans and carb-shaming, as well as lightly gossiped about our hometown politicians. That was, of course, off the record.

You state that beans are trendy in your beans chapter, yet you don’t trust us to be “loyal lovers of beans.” I mean, obviously, that’s a joke, so I’m not going to take it seriously.
I mean it in the sense that it is. It all started when I was lazily reading through Instagram and saw four images in a row of people cooking beans and thought to myself, “But what happens after this?” When we consider how it affects growers, it’s difficult because it’s difficult to invest a lot of infrastructure into pivoting to meet a rise in demand. Then, all of a sudden, it’s no longer there.

It fades, and you’ve developed these infrastructures that can’t be sustained.
Yeah. Take, for example, kale. Will the same thing happen to beans? It’s a little dramatic to believe that, but there’s this cool kids’ club around food that I find incredibly aggravating, especially when such simple goods fall into it. For example, if it’s the Cronut, mermaid toast, or whatever—

So, kale was overplanted, overworked, and overinvested? Is that what you’re saying? That there’s been pushback?
Well, I think it was just in pop culture—for a period, it was difficult to procure [kale] seed due to an increase in demand for young kale. And you get a lot less output from a baby kale than you would from a kale plant that you cultivate and pick from all year. People are now saying, “Cool it with the kale.” That was the infrastructural issue. My concern was, at what point would it be beans?

I suppose it would be that grains are neither wicked nor virtuous in and of themselves. They’re nothing more than grains. I believe that both sides of the spectrum are usually present. Some will argue that “gluten is killing us.” Then there are those who believe that cooking with whole grains necessitates wearing ugly sandals and chewing them for 20 minutes. You should consume a diet high in fruits, vegetables, and whole grains. And many individuals do not want to eat that. Why is this the case? That, I believe, is a valid feeling. I believe that many people have become dissatisfied with vegetables because they are frequently served with no fat or salt, or they are overcooked.

They’re either overcooked or mushy.
I believe the same is true for whole grains and many lentils. Some of that is now being flipped. Grains may be a lot of fun. That’s why there’s a fried section—because it’s not always possible to eat a whole grain bowl that takes hours to chew. You may just fry and pop them, then spread them over a salad..

Pea Breakfast Fritters
“If I were really cute and elegant, I’d bake these for an early morning fete with fried quail eggs and microgreens.” As it turns out, I’m neither of those two, so I make the fritters in large amounts and freeze the leftovers to reuse when I need something to round out an all-vegetable supper.”

Pot Licker and Greens
“I like greens and broccolini cooked just enough so that they aren’t raw but yet a little crisp.” Not in this case. My friend Erin Stanley introduced me to the technique of boiling broccolini in pasta water until it’s just about to come apart. Substitute pot liquor for pasta water, and voilà. Feel free to add some pork or anchovies if you like, but I don’t.”