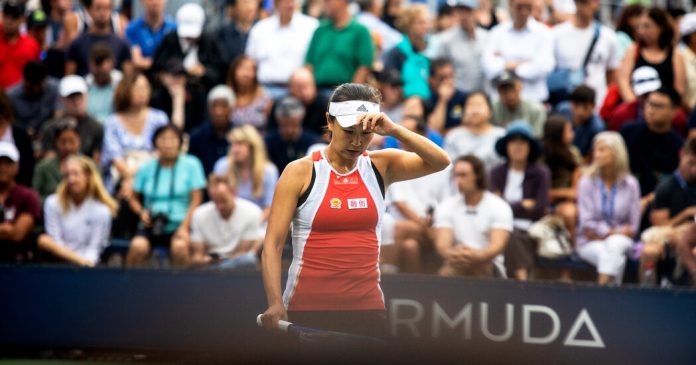 Beijing appears to be relying on a two-pronged strategy of remaining silent and waiting for the rest of the world to move on. The approach suggests that the country’s vast propaganda apparatus has few options for shifting the narrative without drawing more attention to the uncomfortable allegations that Beijing hopes will simply fade away.

The censors’ meticulous work has left almost no trace that Peng Shuai ever accused Zhang Gaoli, a former vice premier, of sexual assault on China’s social media platforms and other digital public squares. Her social media account is like a museum to a bygone era, with no new updates or comments.

These strategies have previously worked for China, at least at home. In recent years, officials have used censorship and a nationalistic narrative of Western meddling to deflect blame for issues such as the Covid-19 outbreak and human rights violations in Xinjiang.

The #MeToo accusation from a lauded and patriotic athlete implicating a top leader, on the other hand, has no simple solution from Beijing’s propaganda toolbox. Any new narrative would almost certainly have to acknowledge the allegations in the first place and would need to be approved by top Chinese leaders.

“The central propaganda bureau does not dare to go out on its own about a former Standing Committee member,” said Deng Yuwen, a former Communist Party newspaper editor, referring to Mr. Zhang’s position in the party’s supreme body. “Xi Jinping would have to approve it.”

The level of censorship used by Beijing to silence discussion of Peng Shuai allegation is unprecedented, according to Xiao Qiang, a research scientist at the University of California, Berkeley’s School of Information.

To the Chinese authorities, the plan of action appears to be one of inaction for the time being. The response has been muted and fragmentary on overseas sites such as Twitter and Facebook, which are blocked in China. When Beijing-backed journalists addressed Ms. Peng on overseas social media sites, they avoided mentioning the nature of her accusations or their intended target.

Instead, they have attempted to put an end to speculation about Ms. Peng’s whereabouts by releasing photos and videos of the tennis star that appeared to show that she was safe despite having vanished from public view. Peng Shuai also participated in a live video call with the International Olympic Committee’s president, which raised even more concerns.

Some saw Ms. Peng’s apparent stage-managing as a reminder of the authorities’ use of forced confessions and other video testimony from detainees for propaganda purposes. To allay international fears that Abdurehim Heyit, a prominent Uyghur folk poet and musician, had died in an internment camp, a state-run news service aired a “proof of life” video of him in 2019.

When Swedish activist Peter Dahlin was detained by the authorities in 2016, he was forced to speak about his alleged crimes in a Chinese propaganda video. In a recent interview, he stated that the gradual release of photos and videos of Peng Shuai by the state media demonstrated that Beijing was monitoring her movements primarily to silence her while waiting for the outcry to die down.

Mr. Dahlin stated, “She is obviously under custodial control.” “From start to finish, everything she does will be scripted; she will be told exactly what to do, how to act, and how to smile.”

In the past, a waiting game has helped Beijing deflect attacks from individual critics, whether they are dissidents or sports stars. When Hao Haidong, a retired Chinese soccer player, called for the Chinese Communist Party’s demise in 2020, officials purged his career records and waited for him to fade from memory. Despite the fact that Peng Shuai brings more international support, Chinese officials may be betting that the social media cycle of shock and anger will eventually pass.

“They have to appease not only the usual critics in the West, but also decidedly apolitical tennis stars and sporting associations around the world, while burying all mention of Ms. Peng’s original charge,” said Richard McGregor, a senior fellow at Australia’s Lowy Institute and author of “The Party: The Secret World of China’s Communist Rulers.”